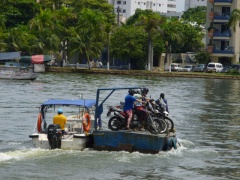 “Don’t worry Manfred will smooth things over”. The first time our group of motorcyclists met Manfred, we already got the impression that our German-Colombian customs helper had seen more energetic days. He sighed, huffed and puffed while reluctantly explaining the apparent hassle he had to go through with the Colombian customs… A very long story short; clearing and insuring the bikes took 5 days, the longest border crossing up till now! Meanwhile we hung around in hot and sticky Cartagena with the other bikers and the Stahlratte crew. Cartagena used to be the most important harbor by which the Spanish SHIPPED out the New World golden treasures. The colonial centre, the surrounding city walls and the fortress stand testimony to the grandeur of these past times. Despite the immense heat we ventured out to visit one of the forts and the old city centre. The remainder of the days, we mainly hid from the sun taking refuge under the ever-blowing hostel fans, however, at night we and the city came to live. The street barbecues served excellent skewers and arepas (corn-cheese pancakes) which we washed down with plenty of ron and cervezas just like the local crowd. The next morning after a particularly enjoyable night on the town, we found ourselves back in the Stahlratte bunks instead of our hostel beds, much to the surprise of ourselves and captain Ludwig. 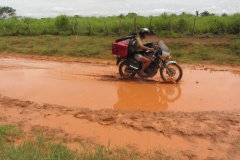 After five days, we were happy to be able to start up the bikes again and leave the city behind us. We formed a small expedition together with “Ginger” the German to explore the swamp roads to the Unesco heritage town of Mompos. The other motorcycle tavelers were a bit more in a hurry and headed directly to Medellin. Our adventure already started a mere 100 km out of Cartagena when some locals informed us about a roadblock en route to the ferry at Magangue. In Colombia locals set up these roadblocks for various political motives, and while foreigners are not specifically targeted, thing can heat up easily. Since we had no desire to be accidentally gringo-lynched, we gladly accepted the offer of two local guys on mopeds to show us the safer backroad. What followed was an hour-long motocross race through knee deep mud trenches, gravel and loose sand only to end up at another, though less politically-oriented, roadblock. To appease the eager villagers we quickly drew some pesos from our wallets, after which we dashed to the ferry dock. Of course every available “helper” jumped to the opportunity to push our bikes onto the ferry, despite our very clear request not to interfere. Luckily the ferry soon took off and while the helpers were all still shouting for their propina (tip), we waved them goodbye as the gap between the ferry and shore widened. Mompos proved to be a delightful, small town. In the evening we ate some greasy “pizza” and cheese rolls at the local Panadaria (bakery) while some (Germans) were enjoying their beers and others sticked to non-alcoholic malt drinks. The onward road to El Banco can be legendary muddy, so at night we anxiously listened to the sound of raindrops hitting the roof above our comfortable hostel beds. Fearing the worst, we must say that the mud track the next day was technical, but certainly not too challenging, luckily the full-blown rainy season had not yet reached these regions. We carefully forced our way through the surreal landscape; red mud, cows knee-deep in green, but swamped fields, an abundance of water-birds accompanying them, and the muddy, but fast-flowing Rio Magdalena running just next to the road. 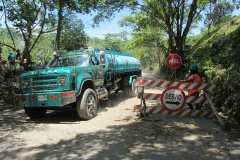 Back on the main road we said goodbye to Ginger and headed toward the mountain region bordering with Venezuela. Here we were thoroughly introduced to the realities of geologically instability; roadwork every 10km with up to two hours waiting times and no alternative routes available. Apart from that the Colombian roads were in general quite enjoyable, although one should curve his enthusiasm when riding a fast motorcycle on these roads as around any given bend the road surface can change from smooth tarmac to a gravel pit without any notice whatsoever. In addition, the only map we were able to source back in Cartagena provided just a very rough indication about the road conditions. So we never really knew what to expect or how long our intended route would take. The bikes didn’t seem to mind though, the suspension and the new Pirelli mt60 tires performed flawlessly, on-road and off-road, and we had a blast riding through this Marklin-like landscape. The only technical issue was with my (Paul’s) bike as it was a bit reluctant to venture higher than 2500 meters. Clearly “den Uitvreter” craved for some much needed mechanical love and attention. Time to head for Medellin, the motorbike capital of Colombia. 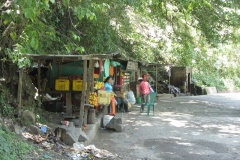 So far, a good two weeks in the country, we have really enjoyed the atmosphere. The people are very helpful and relaxed; mass tourism has yet to reach this country which means that the Colombians get genuinely excited when encountering a tourist, especially tourists on such a strange-looking, big bikes. Whenever we stop at a central town square we have been approached by helpful locals within a few minutes, giving us the opportunity to explain them in our best Spanish that we are looking for a hotel room. However, upon hearing our Spanish stuttering some of them actually quit talking and respond to us with to some kind of sign language accompanied by some mute mumbling, as if we were deaf… how awkward. Despite these weird difficulties, we have always ended up in a reasonable place to stay. The more remote the village, the more enjoyable and genuine the interaction, at least if you don’t mind 50 locals observing you in silent amazement at the same time. Long live motorbike travel and towns not listed in the guidebooks!

This entry was posted in Central America, Colombia, Countries. Bookmark the permalink.

5 Responses to Roaming in Colombia