Old men and the sea

We had known about it for a long time, we had looked forward to it, but at the same we had been a bit hesitant about it as well. In a few more days we would be boarding the Costa Favolosa cruise-ship, which would bring us from Buenos Aires, Argentina to Savona, Italy in 21 days. After almost 20 months and 55.000km through Eastern Europe, Asia and the Americas this ship would slowly sail us back to our home continent again. In this way it would hopefully become a gradual transition, and we would have time to contemplate about our life after this trip, while staring out at open sea, enjoying a red sun setting in a cloudless sky, silence all around us. Of course we knew a cruise might have some disadvantages too, what about tip-requiring cabin stewards, pushy bar personnel, loud Russians and/or Italians, slow, elderly people, the glitter and glamour design of the ship etc. 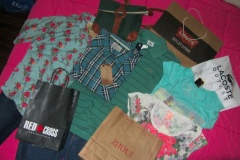 First things first, after traveling for 20 months with two t-shirts, one pants, one sweater and one jacket, some clothing had become a bit worn out. Apart from that we would be seeing the same people for 21 days, so we probably needed some more attire to fit in with the cruise crowd. Luckily Buenos Aires, our boarding city, is the perfect place for a shopping spree. Every different neighbourhood had it’s own type of stores, for us especially Palermo provided what we needed. It was fun to see each other in (more) fancy clothes again after such a long time: jeans, a blouse and even a dress! When cash started to run out, we indulged ourselves in the cultural and historical parts of Buenos Aires: MALBA (Museo de Arte Latinoamericano de BA), museo de Xul Solar, La Recoleta cemetery, including the grave of Evita Perron, Plaza de Mayo, the Obelisk and many more places. In MALBA, we realized we had already visited many museums on this continent and we started to recognize art from the different Latinamerican artists: Torres Garcia, Botero, Kahlo, Siqueiros, Rivera and Xul Solar. After five days of city tripping the day had finally come, we were going to experience cruising first hand! 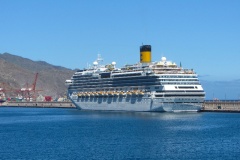 The Costa Favolosa only started sailing in 2011, so the ship is top of the bill in cruising. It is a huge, shiny Italian ship, more than 290m long, it can take 3780 passengers and 1,110 personnel. It has 13 decks (numbered 1-12 and 14), including 13 bars, 5 restaurants, 5 whirlpools, 4 swimming pools, a spa, a gym, a jogging course, a basketbal/tennis court, a 4D cinema, a casino, a theatre, a discotheque, a library, an Arcade, a Grand Prix simulator, a card room, an open-air waterside, and a gallery with stores. So you can imagine that it took up almost the whole of the first day to get a clue where all the different places were, where we could eat, drink, party, do sports, sunbathe, sleep etc. It was fun jumping in and out of one of the many elevators to see what surprise was there, and to see other people hesitantly looking around a corner not sure if they were suppose to be there. It was a true Italian ship with lots of fancy lights, shiny chrome, a myriad of colours on the walls, the floors and even the ceilings. In every corner there was a statue or painting, of which most were not really appealing, but, ah well, we would get used to that over the weeks. 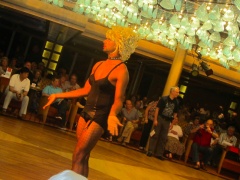 Every day we would receive a „Newspaper” including the activities of the day. The main activity appeared to be eating as it turned out there was only one hour per day when there was no food available. From 7.30-11.00 there was breakfast buffet, from 12.00-14.30 lunch buffet, from 12.00-16.00 grill including french fries and burgers, between 16.00-17.00 afternoon tea with cookies and cakies, and at the same time there was a pizza and salad bar at everybody’s disposal from 12.00-1.00am. If you didn’t fancy a bad piece of pizza (on an Italian ship!) for dinner, you could go to the restaurant for a seven course menu at your fixed „Sitting time”. All food, water, tea and coffee was  included, yet we still managed to stick to our weight! Maybe the sports activities helped us out a bit. Everyday there were several hours of pilatus/zumba/body work-out/yoga/ping-pong/volleybal/…, there were dance classes, and there was crazy entertainment like „Crazy race for the bag”, or „Game: Target the door”. Next to that there was a gym available for 15 hours per day, and we signed up for acces to the spa, including a sauna, tepidarium, steam bath, whirlpool, and Japanese tea garden. In the evenings entertainment consisted of a theatre show, a party or two, and some shockingly inappropriate Italian entertainment. 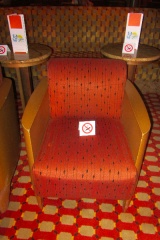 So far, so good you might think… Well, we didn’t talk about the passengers yet. Imagine a village full of old, grumpy elderly, who only speak German, then imagine you put them all on a small boat wit lots and lots of food and alcohol. Indeed, it became some kind of struggle for life at the buffets and bars. We were embarrassed to see our fellow passengers agressively ordering „OMELETTE MIT ZWIEBELN”, without a please, from the Philippine waiters who ‘only’ understood English, Spanish and Portuguese. At the buffet, while there was more than enough, people pushed you from behind, jumped in front of the line, or grabbed one more gamba reaching for it underneath your arm pit. Piles and piles of food were gathered on the plates and eaten as well, combined with beers, cocktails etc. Some people looked like they could explode any moment, especially since most of them also had a completely sunburned face. Other cruise guerrilla included keeping deck chairs reserved all day, without using it, by putting your towel on top, or using a non-smoking sign to keep your seat reserved in the pianobar while you were dancing. 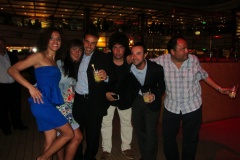 On gala nights, I would wear my ‚fancy’ new, non-wrinkle stretch-dress, while the other ladies tried to overdo each other with lots of shiny jewelry and expensive designer  dresses. So, it didn’t take long for other guests to start wondering about our lack of different outfits. Later we heard that our table guests at dinner, Ans and Rene, had been interrogated by other Dutch passengers about it. The answer that we had traveled the world and therefore did not have much clothes did not impress these people. Luckily there were nice people onboard as well, like Ans and Rene, first-time cruisers just like us, the two cute French sisters of 85 and 90 years old who we met at lunch, some youngsters from Brasil, Uruguay and Argentina that were great to party with, our crazy, talkative Chinese friend Ping, and a swiss couple, who had been traveling by bicycle in South America. Moreover, the personnel was super friendly as well and did not ask for a tip once. 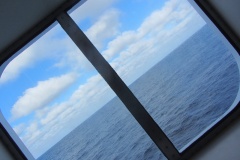 Apparently, there was also some rivalry going on about who was the most experienced cruiser; couples would show up in their „Costa club to Spitsbergen”, or their „Mallorca”, or „Puketh” t-shirts. We almost felt we should have had a t-shirts from our motorbike trip as well, even though this would probably not count. The weird thing is that we experienced that the excursions to the city centres of the ports we stopped in were so short and rushed that you didn’t get a feeling for a place at all. There was no time to talk to locals, or stroll around leisurely outside the touristy areas. One English couple clearly demonstrated this effect by talking about a beautiful Boeddha statue they had seen on a previous cruise in “Malaysia, or was it in Thailand?” „Ah well somewhere in Asia”. We did enjoy the full seven days at sea, having a regime of breakfast-sunbathing-fitness-lunch-some kind of organized activity-dinner&coffee with Ans and Rene-theatre show-party-sleep. Especially as the sun did not stop shining, and the sea has been relatively calm during the entire trip. 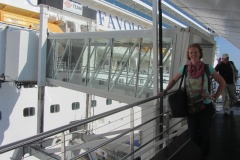 All in all, the cruise has been an interesting experiment, and although we would never book a cruise for our holidays, it was a nice way to return from South-America to Europe.  We didn’t have a jetlag, the temperature had slowly dropped from over 30 to below 20, and we had already had a taste of European culture and food again. Luckily, Savona, Italy was sunny, so our first steps on European soil were not too cold. However, we were a bit overwhelmed by the sense of purpose of the people walking around in the city centre, the cleanliness of it all, and the exorbitant prices displayed in the shops and restaurants. This also meant we could no longer use taxis, but had to take a bus instead, which resulted in us getting lost in the outskirts of the city, looking for our B&B for one night. Fortunately, friendliness can still be found in Europe as well, so some locals helped us out, and soon we were sipping coffee with our hospitable host. Just a few more days without our motorbikes: The next day we would take a Eurolines bus to Barcelona, where our bikes were hopefully waiting for us in the harbour. The last chapter of our trip!

This entry was posted in Argentina, Countries, Europe, South America. Bookmark the permalink.

9 Responses to Old men and the sea