From nightlife to wildlife 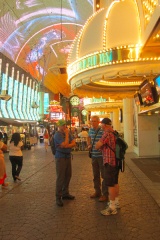 Endless opportunities of doubling our budget and the chance of exchanging our vows in a romantic wedding chapel, the City of Sins is like a magnet that even we, world travelers, could not resist. Coincidentally Las Vegas also happens to have an airport, where we had to wave goodbye to Paul’s parents, but would welcome my parents. The six of us enjoyed the craziness of Las Vegas together for one nigth, after which we had to watch Ria and Rinus leave in one of the Luxor cabs. We had a great time traveling with them and it felt weird watching them leave after being together for five adventurous weeks. Luckily Jan and Paula would look after us for another two weeks, so we could still enjoy having family around. 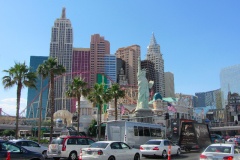 The strip is like nothing we had ever seen before. The Venetia with indoor canals and gondolas, and indoor cobble-stone shopping streets with cloudy skies, Caesar’s palace with Michelangelo’s ‘David’, New York, New York  with the Statue of Liberty and an indoor roller-coaster, and downtown Fremont street full with fake Elvises, high-heeled ladyboys and a ceiling filled with flashing TV-screens. Food was everywhere, so we compensated for our weight loss in Asia by going out for dinner, having fried Oreo’s for dessert and enjoying an unlimited breakfast buffet at The Golden Nugget. They offered anything from oatmeal to bread pudding, bacon-omelets to refried beans, cup cakes and more. We tried our luck on the largest fruit machine we could find, but, against all odds, our two dollars were wasted. Paula and Jan, wisely stayed away from the gambling. After two days on The Strip it was time to fill up the Nissan SUV and discover new territory. Since we would be heading for Death valley, we decided to leave the bikes behind and travel in the luxury of an air-conditioned vehicle for the coming two weeks. 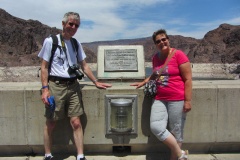 Next we visited a masterpiece that equals the grandeur of the pyramids and the Colosseum: The Hoover dam! At least according to the audio guide. Once known as the Boulder dam, this American Magnum Opus was built between 1931 and 1936, blocking the Colorado river in order to control floods, provide irrigation water and produce hydroelectric power. We admired the nice views into the canyon and made the obligatory picture, whereby two persons are standing in different states (Nevada and Arizona) at the middle of the dam. The summer heat was quite exhausting, so as true Dutchies, we went for a coffee, before we would venture further into the desert. Just before reaching Death valley evening set in, accompanied by the most massive thunderstorm we had ever witnessed, electric discharges illuminating the dark clouds and massive cloud to ground lightnings one after another. Fortunately the rolling thunders indicated we were at a safe distance. In the middle of nowhere, amidst all this natural violence we found shelter in a rather quirky place: Longstreet, a local casino annex karaoke bar annex motel. 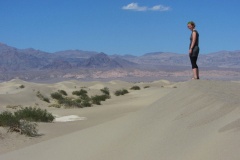 By daylight Longstreet was just as quirky, but did feel slightly less intimidating. As the Mercury rose over 100 Fahrenheit (40 degrees Celsius) we entered Death valley. A desert, but filled with mountains in all kind of colours, sand dunes, rolling boulders and salty plains. The valley floor is very low and is surrounded by high mountain ranges, thereby the heat is trapped near the ground creating an extremely hot climate. We tried one of the hiking trails, but it was just too hot. So we settled for the “Artist drive” by car and visited the sand dunes. One point of advice: Never walk on desert sand with flip-flops, so hot!! After an endless road through this barren, bone-dry landscape we finally found some signs of life again in the village of Lone pine. Gaining altitude the temperature dropped and the surroundings became more and more lush. Yosemite park was definitely near. 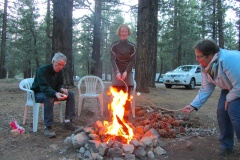 Mammoth lakes is a cute, little mountain village with crisp air, pine forest, mountain bike trails, skiing areas and abundant wildlife. We found a nice cabin at the local RV park, where we were warned not to leave any food in the car, because of the bears! Nights really cooled down, so we made ourselves a nice campfire and had S’mores (melted marshmellows on honey maid crackers) for dessert. Although the box spring mattresses looked very comfy, they were also pretty dangerous as Paula found out when she tried to snuggle herself into her sleeping bag. She slid down the mattress and badly hurt her ribs… quite unfortunate. 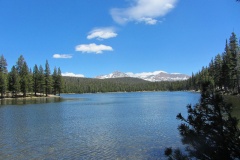 Despite the painful ribs, Paula was still up for a visit to Yosemite National Park. A beautiful winding road took us over the Tioga pass at 3,000 meters, after which we entered the park full of spectacular waterfalls, granite rock formations, pine and Sequoia trees, lakes and a diverse wildlife. At Tuolumne meadows we walked down to one of the largest Sequoia trees of the park, with a hole wide enough for horse-drawn carriages to drive through. We hiked up to Bridalveill fall and Paul and I walked and bouldered up to Lembert dome, a huge, round granite rock, which gave us a nice overview of the surrounding lakes and forest. Near Tenaya lake we took a pick-nick, admiring the reflection of the trees and mountain tops in the calm lake. On our way out of the park we noticed a small van standing still in the middle of the road, coming closer we realized they were looking at two black bears! Wow, amazing to see a mother bear and her cub walk away into the wilderness.

4 Responses to From nightlife to wildlife