In 2006 we have been backpacking all over Peru and Ecuador. Back then we visited the town of Otavalo in northern Ecuador. During our current trip Otavalo was the first of the towns we would revisit. The Otovalo indians did not seem to have changed much over the past years. The women are still beautifully dressed in fine garments and the men still proudly swing around their signature ponytails. In contrast, we found that the town had improved markedly. The streets seemed to be far less grubby, the marketplace looked a great bit more hygienic and our hotel room was quite decent. Over dinner we discussed how things had improved in this part of Ecuador. Yet, as Marlieke rightly argued “It is also likely that our extended journey has lowered our expectations compared to the time when we were two unfledged backpackers”. Ah well, I guess beauty indeed is in the eye of the beholder. 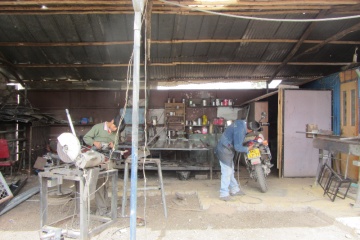 The biggest personal growth we experienced during our journey is the firm believe that any problem, how inconvenient at first glance, can generally be fixed easily. This new found believe would be seriously tested the next few day. Shortly after leaving Otavalo we stopped to check if the spare tires were securely fixed to my bike. Upon inspection I learned that my top luggage rack had snapped of at two points. No biggie, we would surely be able to find a welding workshop enroute to Quito. Marlieke, however, also noticed oil leaking down the front forks of both bikes. We knew that this issue needed to be addressed urgently, but that it would be difficult to source replacement fork seals here. We carefully drove the bikes to Quito and indeed found a welder to fix the luggage rack. The welcome at Yamaha Quito, however, was far from heart-warming. They kept us waiting for hours only to inform us at 4 o’clock that they could not source OEM replacement seals and that all businesses would be closed for the next 4 days because of a national holiday. We had no intention to spend that many days in this big city, so we went on a mad chase through the urban maze in search of aftermarket seals. Luckily, we were able to persuade the mechanic to work overtime and install the aftermarket seals. At 8 o’clock in the evening the bikes were ready. After I put on my riding gear, I walked to the area where the bikes were parked, where I saw Marlieke and the mechanic kneeled beside my motorbike. “Paul” Marlieke said in the most gentle of voices “You are not gone like this” while she pointed to my side standard that was sticking out in a rather odd direction. Great, a broken off side stand… another day, another chore. 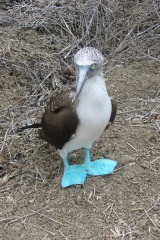 After a disappointing comfort-food dinner at KFC, a night in an overpriced hotel and another visit to a welding shop we were happy to leave in the direction of Puerto Lopez. The route included the Quilotoa loop, raved about in the Lonely Planet. To be honest the scenery did not impress much, however the 4,500m mountain pass did allow us to check our carburation setup for high altitude. Puerto Lopez is nothing to write home about with the exception of the splendid ceviche served at one of the sea-side restaurants. We booked a trip to Isla de la Plata, also known as Galapagos for the poor. The 300HP speedboat covered the 40km to the island in a mere 60 minutes. Quite unexpectedly we also spotted some whales, amazing! Another tick-mark on our bucket list. On the island, our energetic guide took us to the breeding grounds of the famous blue boobies, a marine bird first studied by Charles Darwin. These birds do not perceive humans as a threat so you can get very close without disturbing them. 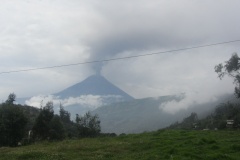 By this time we were a bit in a quandary; the onset of the Bolivian rainy season urged us to continue south, still we felt we had not yet experienced enough of beautiful Ecuador. After some deliberation we decided to return inland to the mountain spa town of Banos. We were not able to cover the 400km in a single push and at the end of a long day we found ourselves on a muddy backroad, at 4,300m in the freezing cold, not good.. Early the next day we did reach Banos and headed straight for the thermal baths for some much needed relaxation and warmth. The other day we rented some mountainbikes and rode through the Rio Verde valley. Halfway we stopped at a 1-km long zipline, only 10 dollars each! Later we walked up to the Pailon del Diablo waterfall. This was the 19th waterfall we have seen during this trip, but it surely was the most spectacular. During our last night in town we heard the Tungurahua volcano rumbling, but in our half-conscious state we did not think much of it. The next morning, however, we found our bikes covered in fine volcanic ash, time to leave. 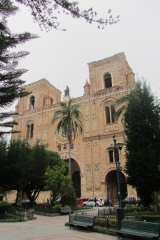 Our last touristic stop in Ecuador was in the student city of Cuenca. After all, quite ugly, concrete Ecuadorian towns this city felt as a relieve. The central plaza was well maintained and the facade of the Cathedral was beautifully carved out of sandstone. There were lots of small pubs packed with students and other bohemians. In our opinion, Cuenca is by far the most enjoyable city we have seen in Central and South-America. What will Peru bring us?

This entry was posted in Countries, Ecuador, South America. Bookmark the permalink.