Costa Rica in a dash 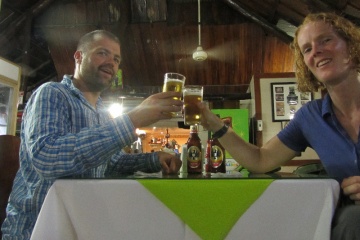 Our plan was to not spend too many days in Costa Rica. Our reason was utterly Dutch: Costa Rica is by far the most expensive country in Central America. Nevertheless, we enjoyed the fine roads with excessively green scenery. According to Marlieke it beared an uncanning resemblance to the Utrechtse Heuvelrug. Costa Rica is clearly a more rich Central-American country with beautiful, well-maintained hacienda’s and lot’s of brand new businesses along the way. People had friendly smiles on their faces and at one of the roadside stalls the owner invited us to taste his delicious, fresh lychees, after which we deprived him of a kilo of these sweet juicy snacks. To cut costs we pitched our tent on a tiny grassy patch next to a roadside restaurant. The security guard would keep an eye out for baddies during the night and in exchange we celebrated our “One year on the road anniversary” with burgers and beer in their restaurant. 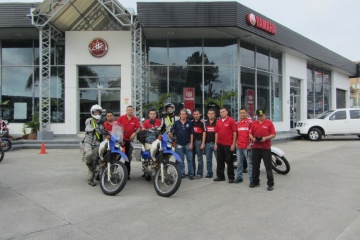 The next day we headed to San Jose in search of new rubber. We ended up at the BMW dealer, he could provide us with some nice Metzeller rear tyres, but against BMW prices… not quite within our budget. Then he insisted on bringing us to our ‘own’ Yamaha dealer, so he jumped on his motorcycle and showed us the way. Upon arrival the whole team came outside to check our exotic Yummie’s. Jeffrey was appointed as our personal translator / assistant, and he went out of his way to get everything sorted; new Pirelli MT60 tyres, new inner tubes for Paul, new grips for Marlieke and all for a fair price. It was nice chatting with Jeffrey; for once we didn’t feel like the ‘rich, weird Gringos on bikes’, but could talk on the same level. Another thing we noticed was that the people are very proud of their  country and would not choose to live anywhere else, Jeffrey even had a tattoo with some of the trademarks of Costa Rica: The leaf frog, jungle trees, and a waterfall. Just imagine a Dutch guy with windmills, Gouda cheese and tulips on his shoulder… Does the Netherlands offer less, or are we just too modest for our own good? In the end, the chores did take up most of the day, so we found ourselves a hotel just outside the city, a bit above budget, but including hot showers, buffet breakfast and safe parking. 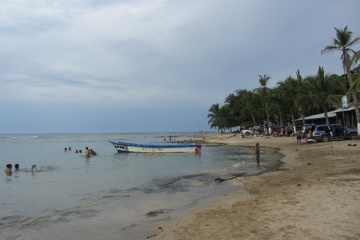 We didn’t want to skip all of Costa Rica’s highlights and decided to ride in the direction of the Caribbean coast. We took a mountainous road and headed northeast, sheltering every now and then for the rain showers. The new tyres were great; nice and sticky even on wet pavement. The road near Limon, the biggest harbour of the country, was very busy with Del Monte and Chiquita banana trucks, and since it was a single lane road it was sslooowwww. The last bit to Puerto Viejo was much more enjoyable; just people on bicycles, palm trees and seemingly endless banana fincas. Puerto Viejo is a surfer’s paradise and had a very relaxed feel to it, so we spend a day hanging around. 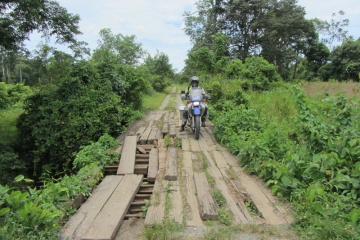 Time for the last border in Central-America: From Costa Rica into Panama at Sixoala. This is known as a tranquil border crossing, the only obstacle being the nearly impassable, deteriorated railroad bridge connecting the two countries. So after stamping ourselves and the bikes out within ten minutes, we asked which side of the bridge would be best: right, center, or left? “Why don’t you just take the new bridge?” was their surprised response. Fools as we were we had completely overlooked the parallel, brand new bridge! To compensate for this loss of adventure we took the old, but direct gravel route to the main road at Changuinola, including some wobbly, old wooden beam bridges. This time we were certain: We will definitely visit Costa Rica again, when our budget is less restricted!

This entry was posted in Central America, Costa Rica. Bookmark the permalink.

8 Responses to Costa Rica in a dash