Since we didn’t want to be caught up by the rainy season, and at the same time we didn’t want to skip too many visit-worthy places, we have been on the move for the last few weeks. As such we didn’t take the time to update our blog. At the moment, we are stuck in Lima for some time, so we can finally update all of you again. We are very happy to see that many people still like reading our posts and we love reading all your comments! 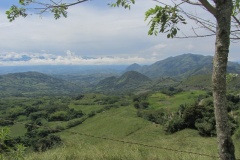 Back to Colombia. As advised by the cyclists Marije and Menno, we didn’t take the main road South from Medellin to Manizales, but took a detour via Aguadas, Pacora, Salamina and Aranzazu, right through the heart of coffee land. Steep mountainsides filled with dark green coffee bushes interplanted with eye-catching light green banana trees. Here and there we found small white houses with nice red-tiled roofs, and balconies filled with flowers. Like before, the road changed from gravel to perfect tarmac, to gravel, but this time we were also faced with landslides. At these places, the road was reduced to half or les than half of it’s original width and the tarmac was filled with pot-holes, fortunately the road was very quiet, so there was very little oncoming traffic. We loved the superb views and the adventurous riding, but it did slow us down, so instead of ending in Manizales, we had to spend the night in a small town called Aranzazu. At first we were a bit intimidated by all the men, women and children staring at us when we halted at the central plaza, but then a friendly couple asked us in perfect English if we needed a hotel. They helped us out and soon we were installed in “Casa de las abuelos”, where we got acquainted with Andres. He was working in this town as a family counselor and spend some days in this hotel every month. He was happy to practice his English and insisted on showing us the town. When we stepped out of the hotel we were almost run over by a group of caballeros parading through the streets on their horses. Instead of galloping, the horses almost danced, walking from right to left to right, moving their legs faster and faster. Soon we realized half of the village was showing off on their horse, while the other half had tied their horses down to have a drink at the bar. Fascinating! 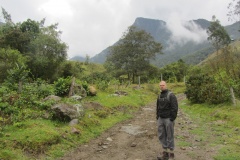 After an interesting night, we continued to Salento, where we had planned to do some nice hiking. We stayed at hostel “The Plantation house”, where we indulged in the free Colombian coffee and mandarins and the beautiful lush garden with colorful birds. The next day we hiked through the Cocora valley, famous for its 60 meter tall Wax palm trees and a wide variety of hummingbirds. The day started a bit cold and rainy, but soon the sky cleared and we had beautiful views of sloping green fields dotted with wax palms and cows. At the Acaime natural reserve we enjoyed hot chocolate while watching the numerous kinds of tiny hummingbirds buzzing around attracted by the sugar-water-filled bowls. We rounded the hike by visiting Finca la Montana at 2800m with a beautiful flower-filled garden. In the evening we were back in Salento, where we ran into biker Gail again (from Villa de Leyva). We joined for a trout-dinner and played some Tejo. Tejo was advertised as “Exercise, beer and explosives”, which off course asked for some up-close investigation. It turned out to be some sort of Jeu de boules, although in this case the “boule” was a heavy metal disc and the target was an iron ring covered with gunpowder-packets. As you can imagine, a lot of fun, especially combined with some beers. 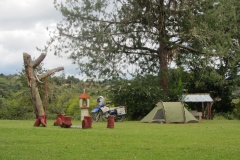 The next few days were more about riding, we took the gravel road from Popayan to San Agustin, crossing the Central Cordillera. After some road works and very dusty roads, we entered the National Park Purace: Dense forest as far as the eye could see. We were at 2,400 m altitude when rain set in (cold!), so we quickly dug out our rain gear and continued more cautiously. Then a big truck came around the corner, driving in the middle of the gravel road, leaving very little space for us. Quickly steering to the outside of the curve while carefully breaking, but still slipping on the wet stones, we managed to avoid hitting the truck. With our hearts pounding in our chest we continued our way to San Agustin. Here we put up our tent at a beautiful, grassy spot of a local campsite and visited the famous archaeological park. This UNESCO heritage site is filled with ceremonial burial sites (1-900 AD) of which especially the carved, monster-like statues guarding the entrances stirred our imagination. 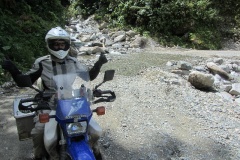 Our final stretch of road in Colombia was from San Agustin via Mocoa to Pasto through the Cordillera Occidental. On the map we had already seen that about 70km seemed to be unpaved, later we heard they call this the Colombian ‘road of death’: Thick gravel, large parts the width of a single vehicle, no guard rails and on several occasions flooded by waterfalls. Fortunately, it was a sunny day, and while at times challenging, we managed to cross without any major problems, which really made me proud of ourselves! Pasto was a busy, dirty town, where we did manage to buy some necessary spare parts and spare rear tires for a good price. After three weeks in Colombia it was time to leave. Just before we exited the country, we visited Las Lajas, a pilgrimage site for Colombians, where -apparently- the Virgin Mary once appeared on the canyon wall. We didn’t need any good luck, but we took the chance to lit a candle for our expecting sister (in-law). For us Colombia has been splendid, far more easygoing than the central-American countries, we can highly recommend it!

This entry was posted in Colombia, Countries, South America. Bookmark the permalink.