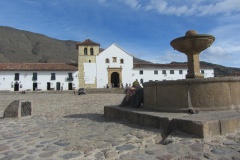 Secure parking for two medium sized bikes is always an issue when traveling to colonial towns. Sure, the cobble-stoned roads and brightly colored house are beautiful, but the narrow entrances and high doorsteps have forced us to engage in some true motorcycle acrobatics. Upon arriving in San Gil, Marlieke went on foot to explore the steep, narrow streets in search of a cheap place to stay with parking opportunities. Upon her return she informed me that she found a cheapie and it might be possible to park both bikes in the tiny courtyard. By now, that is good enough for me and  with 5 mm spare on both sides of the boxes I squeezed the two bikes in the designated spots. In Villa de Leyva, another cobble-stoned gem, we found out that we are still quite lucky as we talked to Yankee Gail, traveling on his huge BMW 1200GS. Given the dimensions of his touring beast he told us that he almost always has to resort to a parqueadero. 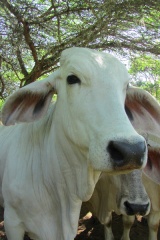 Reminiscing our great hiking experience in Nepal we like to swap our wheels for hiking boots now and then. Villa de Leyva was beautiful to stroll around, but the hike on the hills surrounding the town did not impress: A dry and dusty trail leading to an almost non-existent waterfall. The hike from the white washed town of Barichara (near San Gil) to Guane led us through green hills, pastures with curious, long-eared cows over an ancient stone paved path with many fossils embedded stones. The village of Guane did not disappoint either. Our arrival in the town was noticed by the many cowboys hanging around the local bar on the main square. We returned their smiles and rewarded ourselves with some homemade helados de leche (milk ice creams), meanwhile enjoying the awkwardly large town square and huge, colonial church. The day after we undertook another tiny hiking expedition to the nearby Cascadas de Juan Curi, through beautiful jungle. We were almost the only visitors so we took the opportunity to take a chilly but very refreshing shower under the 180m high waterfall. 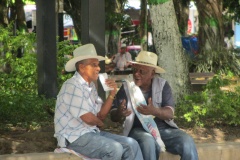 Colombia is divided by two mountain ranges that run parallel from north to south. The first two weeks we had been wandering around the eastern part of the country but due to technical motorcycle issues and maintenance the time had come to traverse to Medellin in the western mountain range. This meant driving down from 2500m  to almost sea level over minor, badly maintained roads. It took us two days to cover the 250 km leg with an overnight stay in Puerto Berrio. This is an important inland harbor on the river Magdalena connecting Bogota to the Caribbean ports. As it is a port town, it is also notorious for providing “relaxation and comforting” to the weary river boat sailors. Upon arrival we asked some locals for a decent hotel, they responded with raised eyebrows…. “decent in Puerto Berrio… not likely”. In the end we settled for an almost decent lodging near the harbor. The owners went out of their way to make their unusual guests feel at home: We got the “deluxe” room and in the morning they even made fresh coffee. At the same time we were allowed to park our bikes overnight in the nearby hardware shop. As it turns out kindness is prevalent in the most unlikely locations. 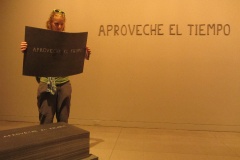 In Medellin we headed straight for Yamaha Mundo. At first, the excellent Yamaha crew was a little bit set back by the arrival of these uncommon, non-Spanish speaking customers, but then they enthusiastically set about working on both bikes. With a few days to spare we explored Medellin. We visited a museum with some interesting works by Botero, the famous painter/sculpture from Medellin and strolled around the central plaza. At Saturday night we headed to Parque Llenas to celebrate the end of the week with the local hipsters. While  looking around for the bar of our liking we were continuously approached by young guys offering Chiclets chewing gum while quickly mumbling “Coca” to explain to us the true nature of their business. We kindly rejected their offers and settled for the legal substitute; a bottle of Ron 3 anos on the terrace of a nice salsa bar. Clearly this city has moved up a lot since the times of Pablo Escobar, yet the apparent availability of coke, and the many glue sniffing homeless guys lingering around the city centre, indicate that much is left to be improved.

This entry was posted in Colombia, Countries, South America. Bookmark the permalink.