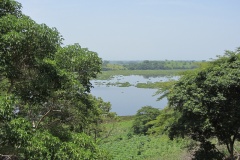 “No, that’s where they dump the bodies!” Fernamdo replied when we pointed out our intended route around a small lake towards the El Salvadorian border. Needless to say we took his advice and opted for the less direct, southern approach via the La Hachadura border. If at all possible we prefer the smaller border crossings; less touts and more friendly officials. In this case our approach was rewarded; crossing the border was a breeze. The supposedly required border bribe of twenty Quetzals each was not necessary and could be used to celebrate our smooth exit with Bimbo cakes, Diana nachos and refreshingly cool Sprite. 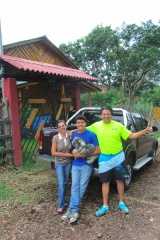 The gps directed us towards Juayua over a tiny mountain ridge road. Beautiful sightseeing until the heavy fog set in. While looking for suitable accommodation we were intercepted by Julio, who, as it turned out, had chased us throughout town. For this motorcycle enthusiast our exotic looking bikes were irresistible. After some chit-chat he invited us to his holiday home in the hills overlooking the village: What a great welcome into El Salvador! Later that evening Julio, his wife and son took us out for pupusas; the El Salvadorian version of the tortilla. Next morning we did a short tour of the town, admired the black Jesus in the local Iglesia and stuffed our bellies on the well-promoted Sunday street-food market. 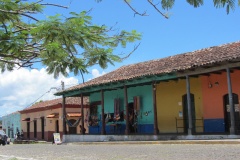 Based on local advice we continued our route over the Panamerican highway (CA-1) through San Salvador, where we got stuck in traffic for over a hour. By the time the road cleared, dark clouds had gathered and before we could reach a hideout we were completely, skin-deep soaked. We just love the rainy season.. Still dripping, we rode into the lovely mountain village of Suchitoto; the El Salvadorian, more pristine version of Antigua. Good old memories to our Pakistani adventures revived when we walked to the nearby waterfall under protection of four heavily armed police officers. In our opinion a bit of an overkill in response to some petty thefts a few years back. The water pouring down the basalt formations was sublime, tempting us to indulge in casual fallacies that would make most intelligent design-evangelists chuckle. Suchitoto itself has beautiful pastel-colored houses with tiled roofs centered around a square, dominated by a white-washed colonial church. We enjoyed the tranquil atmosphere, intensified by the green leafy surroundings and the nearby lake. Though the lake is best enjoyed from a distance so we found out during our midday stroll along the smelly shore. 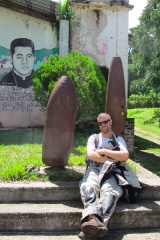 An El Salvadorian-American, running a small hostel/restaurant in town, pointed us to a very scenic off-road/backroad route from Suchitoto to Perquin. Ready for some adventure we took his advice and had a splendid time; riding over gravel-roads, crossing small streams with lake views around every corner. We made a small stop in Cinquera, a quirky little town with a dark past depicted in the murals and the shot-down helicopter prominently displayed on the central plaza. After Ilobasco the road turned into a motor-riders heaven; impeccable new tarmac, bendy curves and very little traffic. The locals were very happy with the new road too; as it turned out black tarmac is an excellent surface for drying beans. Bad weather caught up on us again and soaking wet we negotiated for a better price for a comfy hotel room at Perquin Lenca hotel. 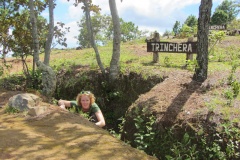 From 1979 til 1992 El Salvador was in a civil war, due to a conflict between the military-led, US backed, government and the left-wing united guerrilla groups under the name of the Farabundo Marti National Liberation Front. Perquin was one of the strongholds of the FMNL guerrillas, and nowadays hosts a museum and the remnants of a guerrilla camp on the nearby hilltop, which provide a good insight into the nature of the conflict and its effects on the civilians. A former guerrilla guided us through the museum, showing graphic pictures and pamflets, home-made bombs and mortars, captured US weaponry, the location of Radio Venceremos, and one of the huge bomb craters still present. At the end of the tour, his friendly expression turned a bit grim as he sighed “this should never happen again”.

This entry was posted in Central America, Countries, El Salvador. Bookmark the permalink.

5 Responses to Bright towns, dark past