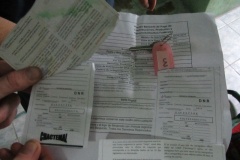 Just when we were both angrily staring outside the window of the local Oxxo (a sort of petrol station shop without the petrol), Lana and Justin excitedly walked in. The American couple curiously inquired whether we are the owners of the two bikes that are parked outside. They happen to be traveling the Americas in the opposite direction and were delighted to find another couple of which the girl is also riding her own bike. Unknowingly, they interrupted our ridiculous fight-over-nothing, made us remember all the fun we had until now and pretty soon we find ourselves laughing over road obstacles, scamming police guys and more the like. After wasting the precious early hours of the day, our moods had finally turned for the better and we headed to the border between Mexico and Belize at Chetumal. Talking about scamming! At the Mexican immigration office, we had to show our FMT paper that we got when we entered Mexico to receive an exit stamp. The official told us we had to pay an exit fee of 295 pesos (=20 euros!) at the banjercito before he could stamp our passports. We heard about this illicit exit fee before, so we told him we would pay, if he could just stamp the passports, we would go to the banjercito afterwards. Strangely enough the official immediately surrendered and stamped our passports. Combined with some confusion about where we need to have our temporary vehicle permits cancelled we slid through the maze and exited Mexico without paying any scam money. Unfortunately, we were too late to help out a German traveller on his bicycle, so he did cough up the money. Check out our ‘receipts’ in the picture, all have an identical ‘unique’ registration number, but you have to admit these border crooks take scamming seriously!

The Belizean border was a breeze; English speaking officials, one building, two desks, no lines, a stamp for ourselves and a paper for the bike and no fees whatsoever. As soon as we left the border area we entered the Caribbean: Brightly colored, wooden shacks on poles, dark-skinned guys relaxing on the porch, fields filled with green sugarcane and the Mexican ‘topes’ had turned into Belizean ‘bumps’ (speed bumps). Belize is only half the size of the Netherlands, and only has about 300,000 inhabitants. Driving distances are small and navigation is easy as there are only two main, paved roads in the whole country. The population is an interesting mix of mestizo (Hispanic-Indigenous), Creole, Chinese and Mennonites. Our first stop was Orange Walk, where most people still speak Spanish, most shops are run by Chinese and fair-skinned Mennonites sell their ware at the daily market. We soon found out that tourist and supermarket prices are at a Western level here, unfortunately this didn’t hold for the quality, so we spent a night in a shitty hotel room/shack for 20 USD. Since there was not much to see around here, we continued towards the Community Baboon Sanctuary a little further inland in Bermudian Landing. 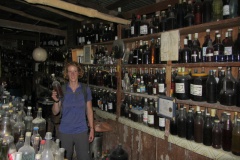 The short ride whisked us away to the land of the Creoles, where motions slowed down into the rhythm of the Howler monkeys living in the sanctuary. Russell was one of the local guides, and with his shiny gold teeth, tall stature, light eyes and dark skin, he has an impressive appearance. Due to the rain we hung around in the small museum for a bit, where we met Holly and her four boys from the States. They needed some activity, so Russell took us for a walk around the small villages of Bermudian Landing and Double Head Cabbage, originally founded by the English and populated by African slaves for the wood industry. We visited Charlie’s winery, a small shack full of bottles, barrels and casks filled with homemade wine based on mango’s, black berries, cashew and what more. He is really proud of his product and let us taste the different wines, we couldn’t resist and bought one of the bottles with cassava wine. The boys had fun splashing through the puddles and checking all insects along the way. In the evening we chilled in the hammock, cooked some food, waved to passing locals, had fun with the stray dogs and camped under the palapa on the sanctuary grounds. 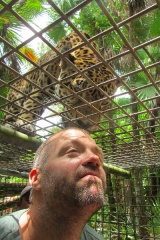 After a walk through the surroundings, seeing the howler monkeys in their natural habitat, and gathering some fresh mangos from the trees we packed our stuff and left the sanctuary again. Since we haven’t been successful in seeing predators in the wild (see Asia posts), we surrendered to visiting the Belize zoo. Coincidentally we met up with Holly and her boys again and we were invited to join them in a ‘Highlight-feed-the-wild-animals-tour’. We fed the tapirs, deers, toucans, parrots and turtles, after which it was time for the highlight of the tour: We were allowed to enter the territory of ‘Junior’ the jaguar, sit inside a small cage and pet him through the steel bars. He was even instructed to lick Paul’s head! Quite an encounter, thanks Holly! After that, one of the boys inadvertently made sure this visit would be even more unforgettable. He was completely excited about seeing the Ocelots, a cat-like mini jaguar. Just at the moment the animal passed by, and before anyone could intervene, the boy put his hand through the bars to reach for it and in a split second the animal attacked and got hold of his thumb. Panic all around, but luckily Paul was calm enough to kick the head of the animal through the fence, after which he let go. Within a few minutes the boy got first aid and they found them a car to drive them to the nearby hospital in Belize city. Still full of adrenaline, we wandered through the zoo, checked the fencing of the Ocelot and noticed that some parts actually had very fine wiring, but other parts still had large holes, large enough for a small boy’s hand… We noticed the personnel did respond to the accident as they were now completing the fine wiring. End good, all good: Holly let us know that his injuries have been well taken care off and he will be fine.

In Mexico we heard about the Mennonites for the first time, but we hadn’t visited any of their villages, so now that we encountered them for the second time we wanted to know more and headed for a community called Spanish Lookout. On the way we ran into Peter, who turned out to be living in this community and invited us to camp in his garden. The Mennonites are a Christian offshoot founded by Menno Simons (a Dutchman, 1496–1561). They originated in Germany, spread to Poland, Russia, Alaska, North-America, Mexico and eventually some of them ended up in Belize. Here they have created their own society, they bought a large piece of land, worked on it to create their own farmlands, roads, bridges etc. Once you enter the village you can immediately see the difference, it looks much more organized, they have well-maintained, green lawns, gardens full of flowers, and big stores with a huge variety of products. All people are fair-skinned, mostly blonde and many women have long hair, wear dresses or long skirts and a hairnet. Peter and his wife Mary were very hospitable and invited us to join them for dinner. While you might assume they would be old-fashioned or very strict, we found out that, although they don’t have television, their son does have a brand new Samsung Galaxy S4 phone with internet, they don’t mind drinking alcohol (in moderation) and are very open-minded and well-informed about what is going on in the world. It was great talking to them and learning about their way of life. And although Belize would not be our ideal place to settle, Spanish Lookout is a gem, where life is good. 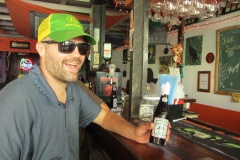 One of the special attractions in Belize are the majestical Maya caves where they used to have their religious ceremonies, of which the Actun Tunichil Muknal cave should be the most spectacular. Having opted out of snorkeling and diving because of the logistics and the costs, we did want to discover one of these mystical places, especially because swimming and bouldering through water-filled caves in the middle of the jungle sounded very adventurous. In a group of eight, armed with helmets and headlights, we followed our guide Emile into the dark cave. I was wondering whether my slight claustrophobic fears would play me parts, especially when someone shouted: “Wauw, you shouldn’t be afraid of small spaces here”, but in the end it was all fine. We had a miraculous tour, swimming, wading and climbing through different rooms within the cave, following the river upstream. Emile from Maya tours was a great storyteller and dragged us into the mystical Maya world, showing us barking dog rock shadows, lots of pottery that was brought here to please the gods and as a climax the remains of human sacrifices, laying there just like the Maya priests left them more than 1,000 years ago. After three hours in the cave we were happy to swim back from the darkness into the light, from a dark and death cave into a lively and green jungle. So far for our Belizean adventures, Guatemala would be our next destination.

This entry was posted in Belize, Central America, Countries. Bookmark the permalink.

4 Responses to Better Belize it!