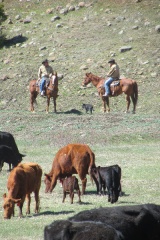 Driving on mountain roads is fun on the bikes, but hard work in a large RV. However, since Paul was guiding the motorade, we took a detour through the most Southern bit of the Rocky mountains. Unfortunately, the drive to Pagosa springs was quite a bit colder than anticipated. We rose steadily through the surrounding pine forests and before long Paul’s bike got jittery from the relatively thin air; indicating that we had exceeded the 2500 meter mark. After some nice pictures in the snow we soon descended again into the green hills, filled with cows, dotted with ranches and the occasional cowboy. To us it felt a bit like Canada; fresh air, green meadows and well-maintained houses (for a change). After the cold ride we took a day off to visit the the medicinal baths on the banks of the San Juan river in the center of Pagosa. The 110 degrees Fahrenheit “Lobster pot” soothed our bones while leaving a distinct Sulfur smell on our skin and clothes that lingered for days afterwards. 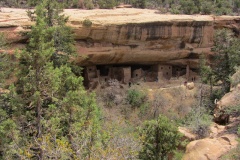 We got to see more from Chimney Rock national park, a former Indian territory, than anticipated. Roadworks forced us to take a tiny detour of 100km around the awkwardly shaped rock and it’s pine forest surroundings. Our destination was Mesa Verde national park, another Indian territory. These steep mountains have been the habitat of Anasazi Indians from 500 to 1300 AD. And even though they call it Mesa Verde (green table), it is actually pretty arid here so the flora is mostly restricted to everlasting Juniper trees, cacti, bitter brush and poison ivy. Many archeological remains can be found here, but especially the petroglyphs and cave dwellings were awe-inspiring. The museum was definitely worth the visit as well as it vividly shows how the Indians used Yucca fibers and turkey feathers to make clothes, what recipe’s they used for corn bread etc. 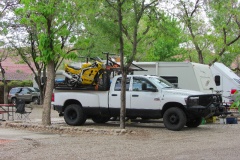 Since the camp showers were out of order we were treated to a free breakfast of American pancakes in the campstore. A nice surprise, because it was a bit of a cold and rainy day. Nevertheless time to move on to the next park on our list: Arches near Moab in Utah. The ride starts a bit boring, but as soon as we enter Utah the scenery changes from green meadows to akwardly shaped, red rocks as far as the eye can see. For once the campsite is actually near the center of town, so Ria and Rinus could stroll around town, while we did some maintenance work. It seems like we are the only ones here without a trailer with ATV, cross bike, or 4×4. Apparently appreciating the outdoors is strongly connected with motorized vehicles in these regions. 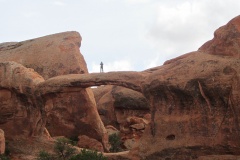 Arches NP was beyond expectations, blooming Yuccas and cacti, petrified dunes, balancing rocks, natural sandstone arches and other spectacular rock formations. One of the walking trails went up to landscape arch, one of the widest natural arches in the world. Bouldering and hiking further down this great path led us to Double-O-Arch, where Paul couldn’t resist posing on top of one of these natural wonders. We also walked up to a viewpoint of the state symbol of Utah, Delicate Arch, not for the faint-hearted as the canyon in between was pretty deep and there was no fencing. After a long day in the park we didn’t feel like cooking, so we visited the local Denny’s with some interesting desserts: Bacon milkshake and brownies with bacon flakes. The taste was not as horrible as you might think. 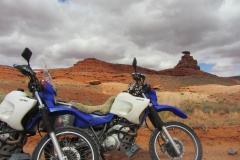 From balancing rocks we went to Mexican Hat, the Three Sisters, and the left and right Mitten rocks of Monument Valley. An epic road to ride on our iron horses, following in the footsteps of legendary John Wayne. In 1921 in the middle of this Indian valley Harry Goulding bought 640 acres of land. Nowadays it is a large complex consisting of a campsite, a cinema, motel, swimming pool, grocery shop and petrol station operated by members of the Navajo tribe. A fascinating place to camp. In the evening we watched John Wayne battling the apparently slow-witted Indians around the Mitten rocks, after which a local Navajo drove us back to the campsite in his minivan. Quite embarrasing. 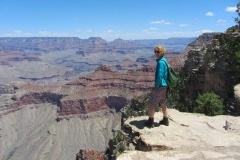 The last park we would visit together with Ria and Rinus was Grand Canyon, not the deepest, nor the widest, nor the largest, but according to the sign definitely the grandest canyon in the world. After all the natural beauty that we had already encountered we were not so impressed by the canyon, especially since the Colorado river looked more like a tiny, brownish creek than a spectacular river. We did do a nice hike, the Bright Angel trail, 900 meters up and down, whereby especially the heat was exhausting.