There is a little secret that we have been keeping from you ever since we entered Central-America. It is a small thing that for us actually already started to feel like a habit. Only now that we are in Chile, and a sign indicated that we could change our habit again, we realized that what we were doing wasn’t ‘normal’. Due to small sewage pipes in many of the poorer countries we have visited it is not allowed to flush your used toilet paper down the drain, so instead we had to dispose of them by throwing them in a nasty-smelling/looking waste bin, which indeed looks like you are now imagining…. What a heavenly relief to be allowed again to flush it all! 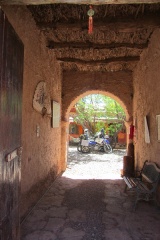 Crossing the border with Chile felt like being warped back into civilization in other ways as well; the streets were paved again, the officials at immigration spoke English, and restaurants looked hygienic and were selling things like pizza and salmon, instead of pollo con arroz or sopa. Also the temperature was a bit more bearable, the strong winds were gone, and the sun radiated a little less brightly, due to a descent of almost 2000m from the Bolivian Altiplano to San Pedro de Atacama. A good climate and ambience to restore our strength. In the local farmacia, I found something to nurture the pealing skin on my sun-burnt legs. At the local petrol station, we could use the hose to remove the dust from our bikes, the air pressure gun to clean our air filters, and we found a handyman who was willing to weld my broken side stand, Perfect, all chores done! In the evening we celebrated a bit; red wine, pizza with tasty olive oil and Dutch ‘Tijgernootjes’ we had kept since Ecuador. It almost felt like we were back in Europe again. 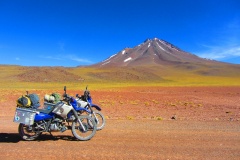 After a few relaxing days in touristy San Pedro, we, however, realized not everything was like in Europe. We decided to cross to Argentina by Paso de Sico, supposedly a beautiful, gravel road through the Andes passing flamingo-filled salt lakes, colourfull rock-walls and views of snowcapped volcanos. This road would lead up to the Viaducto de la Polvorilla, a so-called engineering masterpiece of South-America, not to be missed, right?! So we left early, with enough food and water to camp twice, just in case. After the altiplano we were a bit hesitant about riding gravel again, but the first few kilometers were easy, after that it was a bit more work, but fortunately it never got as bad as in Bolivia. After a night of wild camping under a beautiful, starry sky we rode the last kilometers to the border. Soon we saw the sign ‘Bienvenidos a Argentina’: Great, but where was the Chilean border control?? Another 11km down the road the Argentinian border officials enlightened us: “You need an exit stamp from the office in San Pedro de Atacama, without it we cannot let you go through”. WHAT?! The Chilean immigration is 250kms back?! That is like a border official in Maastricht (most Southern city of the Netherlands) telling you they cannot let you exit without a stamp from their office in Groningen (most Northern city of the Netherlands)…. Unfortunately, we could not persuade the uniformed muchachos, so reluctantly we turned our bikes around and terribly disappointed we headed back to San Pedro. 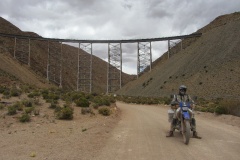 A few days later than planned we finally arrived at the ‘marvellous’ Viaducto de la Polvorilla, via the paved, but boring Paso de Jama (4200m). The train-viaduct was not really worth the visit, but Ruta 40 (Argentina’s Route 66) from here to Cachi was spectacular; a single lane, gravel pass of 4895m, stream crossings, red rocks in all kind of shapes, cacti, and later vineyards all along a completely desolate road. After a few nights of wild camping, we ended up at the nice municipality camping of Cachi; time for a hot shower, some local wine and ‘Pepernoten’ as it was December 5th (Sinterklaas). For the first time during our trip we met fellow campers and we were introduced to asado (Argentinian BBQ), the favorite activity of every Argentinian camper (breakfast, lunch, dinner, midnight snack). At the camping in Cafayate, a little further along the ‘Ruta del vino’, we learned about padel, a weird mix of tennis and squash. The local padel-club had a 2-day tournament, of course combined with lots of beer and an asado, of which we got a bite as well, hmmm. A 1,000 boring kms further South along Ruta 40 we ended up in the wine capital of Mendoza. Here we found a lovely campsite with lots of trees and a swimming pool, a great luxury at temperatures of 35 degrees Celsius.   Time for some bike maintenance (new rear wheel bearings, some repairs), some rest and some social interaction with other European and Argentinian travelers.

This entry was posted in Chile, Countries, South America. Bookmark the permalink.

8 Responses to W(h)ining and dining