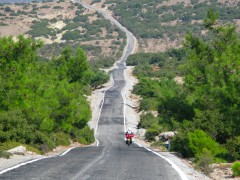 After Truva, we had seen enough stones for a while, so we set off for a ride along the Aegean coast. Quiet roads through a marvelous, mountainous landscape (especially the road between Pinarbasi and Kuruoba). Sleepy villages where people ride around on their tractor dressed in white blouses, suit jacket and accompanying hat. For a few liras we buy fruit and vegetables from a stand along the road. No good free camping spots available, so we end up as the only guests at a ‘campsite’ without running water. The bonus is the free kofte (some kind of meatballs) that we receive from a family having a BBQ. 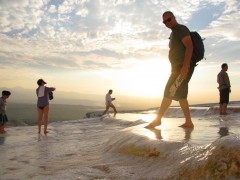 When heading inland, we pass Bergama with stunning views of an old fortress on one of the rocky ridges. After a long day of riding (about 350 km) we arrive in Pamukkale. This town is famous for its travertines (huge white deposits on a hillside due to highly calcified water from a natural spring). The street lining the white hillside is full of signs, people, ugly hotels and tourist shops, so we are happy to find a nice camping spot in the next town, Karahayit. The following morning we walk (which is nice for a change) to  the site, which does not only consist of the travertines, but also includes the remnants of a very old hellinistic/roman city Hierapolis. We are especially impressed by the large necropolis, including a great number of tombs from different time periods. As an infectious disease epidemiologist I am pleasantly surprised by the old hamams outside the city gates, intended to keep diseases out. We end the day by puddling around in the warm spring water, just like the other -mainly Asian- tourists. 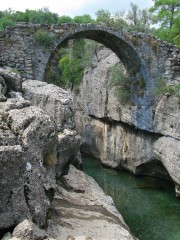 Although we are riding in the direction of Antalya at the southern coast, we bypass this all-inclusive-resort city and stay a few nights in Koprulu Kanyon National Park. A pleasant place with nice roads for bikers. After the most boring road in Turkey (flat, straight, desolate scenery for 140 km between Konya and Aksaray) we enter the Cappadocia region, consisting of canyons, underground cities, cave dwellings, rock churches and eroded coneshaped rock formations. After volcanic eruptions,  sedimentary rocks formed in lakes and streams approximately 9 to 3 million years ago. Around the fifth century, the hittites started carving houses in the soft stone, in order to protect themselves against invading tribes. Later, in the Roman era, the underground cities were extended and used by early Christians as hiding places before Christianity became an accepted religion. The scenery here is very unreal and breathtaking, especially the completely carved churches with frescos are beautiful. Day one we participate in a guided tour around the main sites, on day two we hike through rose and red valley by ourselves. We find out there are also great routes for mountainbikers here, maybe a good idea for the next MBC weekend?! After a few days in this region, we say goodbye to our wonderful hosts from Antique House hotel, a family-run place where we have really felt at home, eating pumpkinseeds, playing backgammon and becoming spoilt by their large Turkish breakfasts of french fries, olives, cheese, honey, jam, butter and bread.

One Response to Western Turkey