To the end of the world

While Chile is about 18 times bigger than the Netherlands, the number of inhabitants is about the same. Most of the people live in the capital city of Santiago, meaning that the South of Chile is still mostly uninhabited. From North to South the landscape changes from dry, sparsely inhabited desert highlands, to the bustling capital area, to rolling hills filled with small villages, thick forests and lakes, to empty, flat, windswept Patagonia. South of the lake district there is only one connecting road: Carretera Austral. This mainly unpaved road stretches for 1240km, from Puerto Montt to Villa O’Higgins, connecting 100,000 people to the rest of the Chilean mainland. Since this part of the country is South of the Tropic of Capricorn, the weather can be very unpredictable and cold. This information, combined with the fact that 80% of the roads would be ripio (gravel) from now on, meant that a new chapter of our travels had started: No more sunshine touring, only perseverance would bring us to Ushuaia, the most Southern city in the world. 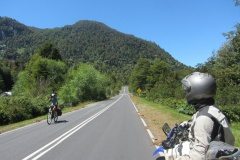 Since we crossed Isla Chiloe, we already skipped the first part of the Carretera Austral and would take off from El Chaiten. The ferry boarded at a small pier, just big enough for the cars and motorbikes to disembark. It was a beautifully, sunny day so after two home-made empanadas (savory pastries) and some coffee from our own stove we drove off into the wilderness. Giant rhubarb leaves were growing on each side of the road, high grey peaks were rising in the distance and around the first corner ice-blue water streamed underneath the bridge; this was indeed a spectacular road. However, it was not deserted at all, at least every half an hour we would meet fellow bikers (without engines) and unfortunately 4X4 were also omnipresent. The latter especially caused problems on the ripio as their wheels would steer up lots of dust and stones making it almost impossible to discern where the road was heading and where the potholes were. On the other hand, it was nice to chat up with some of the drivers, when we had to pass time, waiting for obstructing road works. After starting on tarmac, a tricky, slippery ascent and descend followed on ripio/tierra through Queulat National Park, with amazing views of fjords, glaciers and waterfalls. Unfortunately, the weather rapidly changed, so as soon as we hit tarmac again, rain set in and within minutes we were soaked. Shivering on our bikes we rode into Coihayque, where we found Yolanda’s guesthouse, a place that was remarkably similar to The Burrow (see Harry Potter): Crowded and rackety, but with a lovely, heat-emitting wood stove. 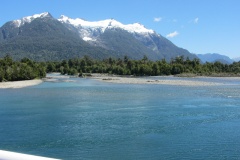 The rain had cleared the air and under a blue sky we headed for Puerto Rio Tranquilo at the shores of lake General Carrera. Nothing could have prepared us for this amazing sight: The water was as blue as blue can be, sharply contrasted by black giants with blinding-white snow on top. With big grins on our faces, and after uncountable foto-sessions, we entered the small town, where we saw two parked BMWs. Roberto and Gigi, from Italy, turned out to be excellent company, so we greatly enjoyed the traditional beers in the local Cerviceria. Since it is impossible to cross the border into Argentina from Villa O’Higgins (end of the Carretera Austral), we decided to head for the border town of Chile Chico, on the South-side of Lake General Carrera. A beautiful ride along the shores. Unfortunately, halfway the wind picked up, so we had to struggle through unpredictable gusts of wind while riding on gravel til Chile Chico, where we found a run-down campsite just in front of the border, where we could at least put up camp sheltered from the wind. 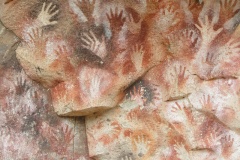 Crossing from Chile to Argentina is always easier than the other way around, because Chilean customs does more rigorous checks on ‚illegal’ fruits and vegetables than the Argentinian. So after four days on Carretera Austral, we easily crossed into Argentina and started following Ruta 40 again: Straight, windy roads through a completely desolate, dry landscape, horrible! The only entertainment was brought by a visit to a local cherry farm and the ancient Cueva de los Manos  (cave of hands), a huge graffiti in the cliffs of a steep canyon. While it was fascinating to see the negative images of hands of people that had lived here more than 2000 years ago, we both detested having to ride 30kms of bad ripio back and forth just for the visit. The next town, Baja Caracoles, was no more than a petrol station and a handful of shacks, yet the owner of the hotel still insisted on 35 Euros for a dodgy room. Dutchies as we are we decided to stealth camp instead, resisting the strong winds in our tiny polyester shelter. 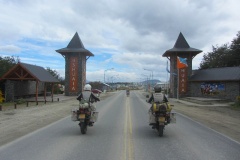 After another day of boring and cold riding, we reached El Calafate, famous for the Perito Moreno glacier. While we did treat ourselves to a warm dorm bed and heated cooking facilities, Paul insisted we would use the bikes to ride the 80kms to the glacier: COLD! The ride was, however, very rewarding, the glacier is famous for good reasons and we spent quite a while walking around on the boardwalks. Another highlight in this region is Torres del Paine National Park, in Chile, so after another border crossing we spent a night in this amazing park full of lakes, mountain peaks, guanaco’s and nandus (or rheas). Now that Ushuaia was getting closer and closer and the number of sights were running thin, we decided not to linger any longer and press on. After a night in cosy Puerto Natales, we found ourselves in Punta Arenas, where just the Strait of Magellan was separating us from the most southern province of Argentina: Tierra del Fuego. The next morning three bikers headed for the ferry: The two of us and Arun (British/Indian) on his BMW1150. After a beautiful cruise, with even some whale sights, we entered the barren land, named after the burning fires of the once present Indians. The three of us had a last stopover at Rio Grande, B&B Ruta 40, where Wyllie and Martina prepared an amazing warm welcome, including home-made pies, chicken and rice dinner, wine and ice-cream. Then finally, the last stretch of road, 250km of wind and cold, straight roads and a mountain pass, but there it was the entrance gate of Ushuaia!!

This entry was posted in Argentina, Chile, Countries, South America. Bookmark the permalink.

3 Responses to To the end of the world