The eye of the tiger 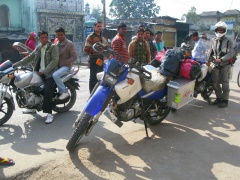 Now that spring had begun in Nepal we felt that there was no reason to linger in India. The map revealed that the nearest border crossing at Gadda Chauki, Mahendranagar was a mere 180 km away.  Again we underestimated the delaying capabilities of the Indian traffic. We had to spend one last night in an overpriced, scruffy business hotel. Next morning, while brushing my teeth, I was kindly greeted by a curious rat: Time to leave! The border crossing was in sharp contrast to the rest of India as we appeared to be the only motorized vehicles crossing that day. An unmarked, seemingly abandoned off-road trail led us to a closed gate. On our request a polite border official opened the gate, so we could ride over the hydro-dam to two chicken sheds, which turned out to house the Indian customs and immigration officials. The procedures were fairly straightforward, a nice chat, some free chai, the obligatory paperwork, lots of stamps and we were free to go. On the Nepali side, yet again the proper route was a completely unmarked dusty trail, but in the end we managed to locate the immigration guy sleeping behind his desk. After his rude awaking, his eyes sparkled with joyful anticipation: fresh tourists to scam. After issuing the visas, he proposed a special price, which was skillfully countered by Marlieke. After a few seconds of awkward silence in reaction to his special offer he broke and accepted the official amount of 80 Dollars for two 1-month visas. 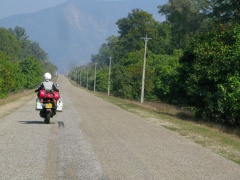 And we were right, Nepalese traffic is much less challenging than Indian traffic. The national ‘highway’ in the Terai (the Southern, flat bit of Nepal) had perfect tarmac, and outside the villages we were sometimes the only ones on the road, what a bliss! The few bus and truck drivers also seemed to be more laid-back, the most dangerous fellow road occupants were the small school children chasing each other by foot or bicycle. Although most people go to Nepal for the mountains, the Terai also has stunning scenery; small mud-houses with thatched roofs, green rice paddies and in the background the majestic Himalayas. 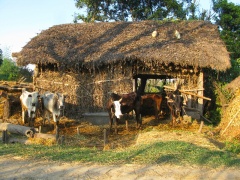 The first touristic site on our agenda was Bardia National Park, some 13 km off the highway. Less overrun by tourists than Chitwan National Park , the village near the entrance was still very traditional. Walking around felt like being in an open air museum: No corrugated iron roofs and no concrete, but oxes and chicken roaming the farmyards, and families working on the small fields enclosed by little purple flowers. We were heartily welcomed by the staff at Jungle Base Camp, where we had our own little mud hut surrounded by a tropical, lush garden. We met Bissnu, our guide, which would lead our two day jungle walk. 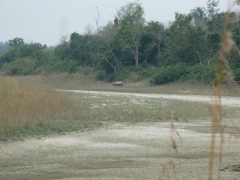 Early next morning we set off and entered the park armed with our own jungle-guns: A bamboo stick that would surely fend off any attack by wild animals. He instructed us how to handle if a rhinoceros or an elephant would attack: Either hide behind a tree or run up and down a steep slope. Upon our question what we would need to do if a tiger took too much interest in our presence, he smiled and said “if that happens than you are done”. Somewhat worried by his statement we ventured deep into the park. Deers and birds were abound, but the more exotic animals did not yet show themselves. After a couple of hours of walking we stopped for lunch, when all of a sudden a rhinoceros crossed the dry riverbed some 100 meters away. Later that day we also spotted a family of very playful otters. Slowly we crept towards them, but after a few moments they noticed us and we found ourselves in a weird Mexican standoff: Us hiding in the tall grass and the otters raised on their back legs both curious and alarmed by our presence. 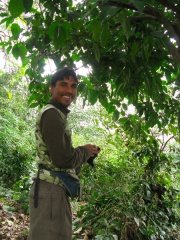 Next day’s safari started off exciting when we heard the distressed call of the deers. From Bissnu we learned that this can indicate the presence of a tiger, so we decided to investigate. At a grassy opening in the forest we spotted the herd of deers, clearly distressed by an event at the forest edge. Not able to gain a clear viewpoint we waited for some minutes when we heard a loud deep roar. According to Bissnu the tiger was very near and was  clearly enjoying his breakfast. We crept to the undergrowth in search of a better viewpoint, but after a while our guide decided it was not safe to venture any further since the tiger could be just around the corner, so we retreated. The remainder of the jungle walk was, unfortunately, rainy and uneventful. 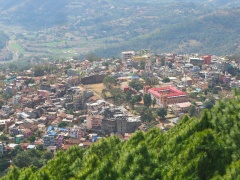 Heading up from the Terai to Tansen, a mountain village, meant that the wide straight ‘highway’ changed to a narrow, winding road with the occasional pothole or landslide. The riding was generally good fun, although we still had to watch out for oncoming traffic cutting the blind corners. The closer we got to Tansen, the narrower the road became. Tansen did not really live up to it’s expectations, as described by the Lonely Planet “Tansen (Palpa) is a romantic medieval hill town”, a lot of concrete, electricity cables hanging around and dirty streets. In the centre we ran into an Italian couple on a BMW 1200GS, still fresh, since they had only rolled off the plane in Kathmandu a couple of days ago. We joined for dinner in another scruffy hotel, luckily the food was of a better quality than the room. Over dinner we found out that our new friends were attempting to ride overland from Nepal towards Singapore from where they would ship to the Philippines. This meant that they would have to cross the Birmese land border. An impressive feat if they would succeed, since this has been impossible for many years. While they were in a bit of a hurry, we took a day off to stroll around Tansen. We discovered some historical remains in the form of typical Nepalese architecture; wooden balconies decorated with intricate woodcarvings and a three-topped roof temple with erotic carvings on the support beams. In the temple courtyard a wedding ceremony was in full progress, it all looked quite serious and they did not seem to be aware of our presence. After another night in our mould-infested room, time for our next destination.

4 Responses to The eye of the tiger