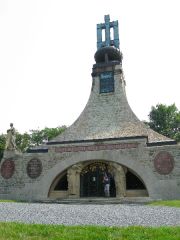 For those of you living close to the beautiful town of Amersfoort (NL) you might have visited Austerlitz and seen the bizarre pyramide in the forest. This was a gift for Napoleon after winning the battle of the Three emperors in Slovakia close to the town of Austerlitz in December 1805. We visited the town now called Slavkov u Brna and found a memorial put up there by a local priest in 1910. It is commemorating the casualties from all armies involved (French, Austrian, Russian) and a general appeal against war. There was also a “multimedia spectacle” about the battle inside a small museum next to the memorial, where a lady gave us a private tour with a bit of a communist feeling.

This entry was posted in Countries, Czech Republic, Europe. Bookmark the permalink.