Needles to say this journey has been an experience of a life time. We have had an absolute blast. Yet after a so many months, we had got somewhat tired with some aspects of traveling by motorcycle almost everyday. Pressurize the cooking stove and put the cooking pot on, pack the sleeping bags, deflate the air mattresses, break down the tent and stuff it in the dry bag, pack the clothes, get the cooking pot from the stove and prepare porridge and tea, eat breakfast while planing today’s route, wash and pack the cooking gear, fix everything to the bike, check the chain slack and tire pressure, put on your riding pants, sweatshirt, buff, jacket, earplugs, helmet, sunglasses, gloves, turning on the GPS, extracting the choke, turning the key, pressing the ignition button, and hoping the engine ticks over, ride all day and in the evening find ourselves a new affordable home. That all does become a bit of a chore. Then riding isn’t all fun either, when it is colder than 18 degrees, when it is windy, when it rains, when the road is boring, or the surface highly corrugated. So every once and a while we had jealously looked at those backpackers sitting inside these warm and cosy busses, being zipped seemingly effortlessly from one exciting place to another.

Thus after leaving the bikes, we were pretty exhilarated that we would now also be able to enjoy the perks of being a backpacker. Our first taste of bustransport would be the night-bus from Valparaiso across the border to Mendoza, a 10-hour ride. A distance that would have taken us at least two days by bike, plus queuing for a long time at the border. We bought the necessary foerage: A bottle of mineral water, some sandwiches, cookies and dulce de leche caramelos. The Chilean vehicles do not compare to transport in the rest of South-America. Instead of Bolivian chicken busses, Chile has super deluxe coaches with incredible leg space, even for tall Europeans. As soon as we were seated the steward came by to offer us something to drink and hand out the on-board warm meal. We also had a nice chat with our neighbour, who turned out to be an indigenous inhabitant of the Mendoza region in Argentina. After some cultural lectures, we simply enjoyed the view from our comfortable seats, watched a movie on the laptop, prepared our arrival and onward travels from Mendoza and had a small nap. Travelling had never been so easy! 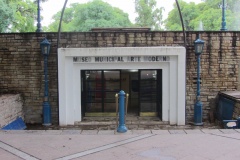 The border crossing had been a bit of a hassle; we all had to get out of the bus in the middle of the night, stand in line with our passports, and all of our luggage had to be scanned for highly dangerous fruits and vegetables and other illegal substances (when on a motorbike they never scanned any of our luggage). Apart from that, it had been a smooth ride and only 10 hours later we were already in Mendoza, over 400km from our starting point. Then the fun started. Of course there was no direct connection to Cordoba, the city of our interest, so we had to spend the day in Mendoza. A city we had already extensively visited and is not as exhilarating anyway. There was no luggage drop-off, so we dragged our bags around the city centre looking for a way to kill the hours. After two McDonald’s cheap coffee visits, a look at a temporary Picasso exhibit and a visit to our trusted moneychanger we could finally head back to the bus station. As taxis were way too expensive and the local bus system pretty confusing, walking was the best option. Sweaty and a bit irritated we made it to the bus-terminal, only to find out we had to wait for another half an hour before our bus would leave. Ah well, so backpacking has some minor disadvantages too. Surely, we would enjoy the landscape between Mendoza and Cordoba from our comfy bus seats. 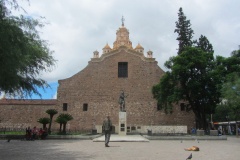 The steward shouting: „Cordoba, Cordoba” rudely awakened us from an afternoon nap. “What, we are already there? I just closed my eyes for a second!”. Surprised we gazed out of the window: “Terminal de buses Cordoba”, so without experiencing anything of the ride we had already reached our destination. Unwilling to leave our warm and comfy environment, we slowly gathered our belongings and prepared ourselves for another tiresome walk to the hostel. This backpacking already started to get to us, the whole concept of zipping yourself from guidebook highlight to guidebook highlight, without experiencing any of the surroundings, without the possibility to leave whenever you like, without the flexibility of your own transporting system, without ending up in unexpected places, where was the adventure? 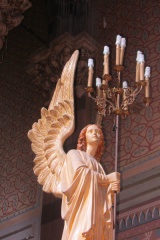 As Cordoba turned out to be just another city, we took up our guidebook to select another ‚hot’ destination. Since we still had quite some time to kill before our cruiseship would leave we decided to add another country to our list: Uruguay. And to add some adventure to our backpacking experience we decided to try hitchhiking, just like our  Argentinian fellow-backpackers. This turned out to be harder than we thought and after 2 hours of trying, a local advised us to check out the train: A cheap, but very slow alternative. That sounded interesting so we gave it a go, unfortunately the lady at the ticket window informed us that this train only runs once a week starting from April?! And as it was March, we had no choice, but to head back to the bus terminal.. 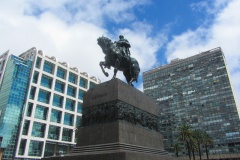 We started in the biggest city of Uruguay: Montevideo, the capital, with a staggering 1.3 inhabitants, about one third of the countries total population. Apart from being a prosperous, aka expensive country, Uruguay has the name to be very tranquil as well. We found out even the capital had a real small-town feel to it: People were very polite, still greeting each other, helping each other by holding doors open or picking up dropped pencils etc. It almost felt surreal. The most funny thing was their extreme obsession with Yerba Mate, some sort of herbal tea that needs to be prepared and drunk in a special way. Almost every woman or man was carrying around a bag, containing a thermos (for the hot water), a mate cup made out of kalebas, a stainless steel straw (for drinking the tea without swallowing the tea leaves) and a big bag of Mate. And it was not just those people going for a leisurely walk, but also the business man on his way to work, the bus driver riding around, the garbage guy emptying the trash bins, etc.

After a two day’s walk around Montevideo, visiting the old town, the Torres Garcia (famous Uruguayan painter) museum, an old Spanish fortress, and the radio tower for some great views we felt we had seen it all and headed further North to Punta del Diablo. A town with 50 inhabitants, and famous for a good surf. Since end of season was kicking in, most hostels, rental homes, restaurants and bars were deserted. However, we still found a lively place at “Pueblo arriba”. And while there weren’t many tourists we did run into an old friend: Ginger the German, with whom we sailed from Panama to Colombia! Although our intention was to join the surf crowd, the weather wasn’t that inviting, so instead it became a week of contemplation about our approaching trip back home. Just one more week and we would be boarding Costa Favolosa!