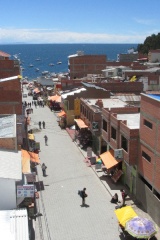 “You guys rest too much!” so ended an email from our befriended German motorcyclist Ingwer. Back in September we arrived in Cartagena Colombia together with 5 other bikers. A couple of months later we are hugely lagging behind most of the other parties. Some of them are getting close to, or have already reached, the southern tip of the continent, others are already back in Europe for more than a month. Clearly we are turtle-like slow travelers… but we wouldn’t have it any other way. Anyway, I will utilize one of our many breaks to report home on our journey through Bolivia, a rough gem amid its more polished neigbours in the southern cone. 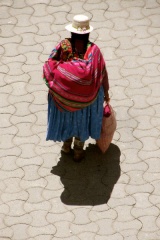 The first town after crossing into Bolivia was Copacabana (yes, just like the song) on the shores of the highest navigationable lake in the world: Titicaca. Similar to Peru the buildings were still crumbling, ugly, concrete and wrought iron boxes. The women still dressed in the same thick multilayered dresses, but now they also wore a high velvet bowler hat, beautiful! Unfortunately, the interaction with the people deteriorated somewhat; store-, hotel- and restaurant-personnel seemed to be united in trying to extract every last gringo-dollar from us. Prices were inflated, set-menu meals were too small and the rude waiters tried to verbally batter us into giving a tip for an appalling service. Little did they know that we have been to India and are thus by now impervious to these tactics. The hotel room, however, was excellent value, so we took a couple of days to relax, write and unwind. 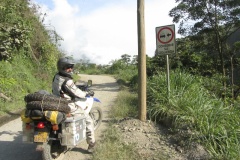 A must-do item for every motorcycle adventurist is the Yungas road, previously known as „The most dangerous road in the world” or, even more inviting, „death road”. This single lane, gravel road connects the Amazon bassin with the La Paz altiplano, precariously clinging to the cliff-sides with steep drops and many tight, blind corners. Due to the crumbling roadside drivers have to keep left on this road, in that way it is easier to check whether your wheels are still on the gravel, which meant that, since we were riding up, we were on the safe hillside, luckily! In the nineties an estimated 200-300 people died on this road every year. After the construction of the modern parallel road the traffic on the Yungas road has dropped significantly and nowadays it is mainly ridden by crazy gringos, either by mountainbike or motorcycle. We left early and started on the road with quite some anticipation. As hoped traffic was low, the road was dry and the tropical mist had not yet arrived. Most sections were not that tricky at all and the bits that were properly dangerous were adequately marked by guardrails or, rather grim, by countless roadside crosses. It took us two hours to complete the road, after which we had a short celebrationary biscuit break, and we ascended back to the altiplano over the new, safe road. 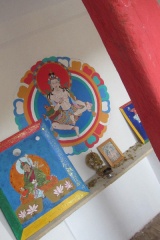 It took us a couple of hours to navigate La Paz, with its sprawling suburbs and small, steep roads, especially since the GPS did not allow us to take the main bypass. This did lead us to an excellent-value lunch of peanut soup and pollo a naranja for only 20 bolivianos. We were headed for the Valle de la Luna, a moon-like landscape amidst which an eco-resort has been built, where we would participate in an amazonian meditation ceremony. It was a spectacular setting: Pink, tower-like rock structures, in the distance the snowcapped peak of the Illimani (6458m), little adobe, hobbit-like huts, cacti and flower-filled gardens and of course some stray dogs and an arrogant llama completing the picture. An excellent location for some soul-searching. The ceremony was helt in an Indigenous kiva, like we had already seen in National Park Mesa Verde (USA); a very inspirational environment. While the ceremony did not bring us the meaning of our life, it did help to see what is most important to us: Our families back in the Netherlands. After another relaxing day, enjoying the strong sun at this altitude and the tranquility of this place, we aimed our wheels South again in the direction of the largest salt lake in the world: Salar de Uyuni.

This entry was posted in Bolivia, Countries, South America. Bookmark the permalink.