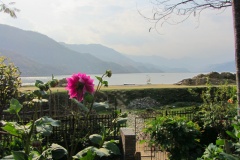 After another winding road, 100 km in 5 hours, we were greeted by a hail storm just before Pokhara. We settled in a nice guesthouse and went out for a night at town to celebrate finishing the silk road route without any major accidents. The food and wine at Moondance restaurant was delightful and we felt exuberant about reaching our intermediary goal. Next morning, however, we were reminded of the fact that we had drank very little alcohol over the past 6 months. 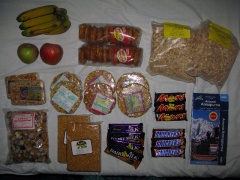 With a heavy head we set about the task of preparing for our trekking around the Annapurna circuit. This is one of the longest hiking trails in the world of 250 km, 19 days and includes a high mountain pass at 5416 meter. Before heading of on such a journey it is good practice to gather some local intelligence. Fellow travelers and the local hiking agencies informed us that the Thorong-La pass was probably still closed due to heavy snow fall. Fortunately, the weather was about to improve rapidly so by the time we would reach the pass, conditions were likely to be more favorable. They did advise us to bring along some crampons, which would later proved to be an excellent asset. We had a careful look at our trekking gear and picked the bare minimum of clothing. In addition, we stocked some high calorie snacks, which would be very expensive at the higher camps, so we were told. Our combined gear weighed a mere 20 kg and fitted in one small and one medium sized backpack.

The bus ride to the starting point of the circuit was very uncomfortable; on the roads we prefer two wheels since it allows you to avoid potholes more efficiently. After a 5 hours drive the bus dropped us and around 20 other tourists off in Besi Sahar. Among hikers it is well know that the Nepali government has authorized the construction of a dirt road around the Annapurna mountain range. As far as we knew this would only have a negative impact on the hiking experience in the western stretch of the circuit. So, much to our surprise we turned out to be the only ones starting from Besi Sahar while all the others opted to continue their travels by jeep to Chamje, a three days walk. Apparently construction work had started on the road in the East too. Visions of walking along a dusty construction road for 2 weeks ran through our heads while we warily mounted our gear and set of in northern direction. 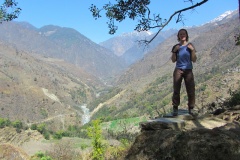 Although we had to walk on the road for some parts of the circuit, most kilometers still followed century old walking paths, up and down stony trails or steps along the mountain ridges. The trek started at the low altitude of 890 meters. The vegetation was green and lush and the farmers were busy ploughing the raised terraces that line the steep hill slopes. In every small mountain village there are many so-called teahouses; rudimentary hotels that offer cheap, very basic rooms and slightly overpriced meals. The higher we came, the colder the nights became, so we spend many evenings crouched around a small fireplace, exchanging tall tales with fellow trekkers. Hinduism is the main religion in Nepal, but in the more remote mountainous areas Buddhism takes the overhand, so we entered a world of colorful prayer flags, walls with prayer wheels and carved prayer tablets. After a couple of days walking we had the opportunity to visit a splendid Tibetan Buddhist monastery in Upper Pisang. The walls of this monastery have been meticulously decorated by beautiful frescos of the live of Buddha, and the ceiling has colorful, geometric shapes closely resembling a mandala drawing. 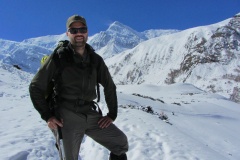 In Manang, 7 days in our trekking, we took a rest day in order to acclimatize to the altitude of 3,519 meters. Here a basement under a village house was converted into a basic cinema with fire stove. Together with 20 other trekkers, dressed in hats and gloves, we watched “Into thin air”, a movie about the tragedy that enfolded on Everest in 1996 at which 8 climbers died. Somewhat worried by this story we exited the cinema to be greeted by a snowstorm… For the next couple of days, bright white snow fields under clear blue skies would dominate the scenery. We continued over icy footpaths and through deep snowfields, humbled by the snowcapped giants looking down upon us. As we gained altitude we soon found ourselves at equal height as some of the surrounding summits. 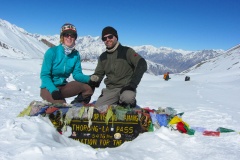 In the final teahouse before the high pass, we teamed up with Uwe, a German solo hiker, in search of inspiration for his new novel. At 5am the next morning we started the final, freezing ascent, 1,000 meters up to the Thorong-La pass. The first 400 meters were a steep icy climb ending at High camp, where we warmed ourselves with some ginger tea. When daylight set in we continued the climb over a narrow snowy path next to a steep slope. The closer we got to the summit, the more people we overtook. Apparently some of them were really struggling with the thin air around 5,000 meter, but we felt surprisingly fit. And then we reached the summit, wow! We ate our “special occasion” chocolate candybars, took some victory pictures and placed our signed, sacred stone (from the riverbed of Bardia national park) on the holy rock pile, wrapped in Tibetan prayer flags. Ahead of us were ‘just’ 1,500 slippery meters down to Muktinath, a pilgrimage place for Hindus and Buddhists, where we would spend the night. 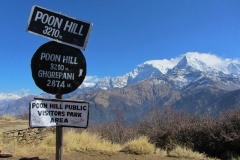 The circuit continued through idyllic villages, passing remote monasteries and blossoming apple tree gardens and river valleys. Following the example set by the locals, we strolled along the dry riverbed in search of ammonite fossils. Marlieke found three premium specimens and I was assigned the task of cracking the stones by brute force. Two weeks down the trail we ended up in Tatopani, where we relaxed in the hotsprings with three befriended Australian/Kiwi/English trekkers. The closer we got to the finish, the busier the trail became with fresh, mainly unfit tourists. They must have wondered where these two smelly, mountain Yetis (us) came from. Poonhill, surrounded by beautifully blossoming Rhodondendrons, offered us a last glance of the mountain giants. Grateful and certain that we will greet them again, we turned our backs and strolled down the last hills to the bus stop to return to bustling Pokhara.

7 Responses to Meeting the Giants