Lost in the Indian jungle 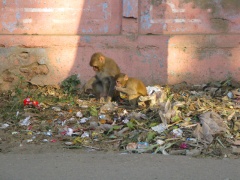 India has really felt like a break in our travels. We were no longer in a hurry to escape from the cold, or to make sure we did not overstay our visas. We had also crossed the most ‘ dangerous’ countries en route, and actually had to wait before entering our next country on the list (Nepal), because it was still to cold to ride in the Himalayas. The traveling experience was very different as well. We did not feel the same hospitality or familiarity with the Indians (exceptions confirm the rule) as with the Irani or Pakistani and since we had to leave our motorbikes behind we were now ‘mere’ backpackers. On top of that we were actually ready for some relaxation, but we soon found out that in that case India is not the best place to visit… There is a constant noise of horning buses, cars and motorbikes, tuktuk drivers trying to talk you into their vehicle, cue-ing people constantly try to cut inline, shopkeepers try to persuade you to buy pashmina shawls, handmade shoes or miniature paintings, and whenever you buy something you have to bargain hard. Worst of all, young men seem to be quite sexually frustrated here and continuously stared at me and tried to make pictures of this sleazy Western woman (in baggy pants and dirty soft-shell..). With the Delhi rape in the backs of our minds, this did not really help to make us feel at ease. 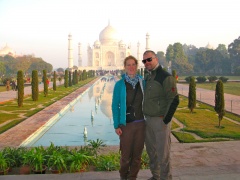 Nevertheless, we tried to make the best of it and since we had some time to kill, we traveled an extended version of the golden triangle (Delhi-Agra-Jaipur). Our first stop was Agra, where Shah Jahan built the famous Taj Mahal for his favorite wife. Some of these famous sites can be a bit of a disappointment as they look exactly like the pictures in the guidebook, but in this case we were really impressed by the craftsmanship and the serenity of the complex. We managed to take some cheesy pictures before the excited crowds flocked in. In the afternoon we visited Agra fort, which was very similar to the one in Lahore, not surprisingly as both were built by the Mughals. At the end of the day Shankara veggies restaurant proved to be a good choice for their perfect banana lassi (type of milk drink), Kingfisher beer, spinach curry and channa masala (chick peas curry) with rice. We almost felt relaxed sitting there on the rooftop with a semi-obscured Taj Mahal view.

After a bus ride of 1,5 hours for less than one Euro, we arrived at our next destination: Bharatpur, known for one of the largest bird sanctuaries in India, Keoladeo National park. We hired two Dutch-looking, black and sturdy bicycles and rode around the park. As soon as we were off the main road it was very quiet, and it was just us and the wildlife. There was an abundance of birds, so they were easy to spot, just like the monkeys, jackals, deers, antelopes, and grey mammals that looked like a crossing between a cow and a deer. We even had a little nap on the green grass in the shade of a pine tree. Afterwards we ran into Alex, from Belarus, who we had met the evening before at Spoonbill’s for dinner. He also really enjoyed the quietness and cleanliness of the park. 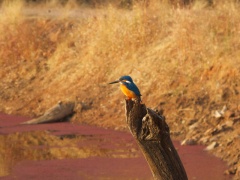 The train, just as dirt cheap as the bus, took us to Ranthambore national park, the best place to spot a tiger in the wild. We found a cheap place to stay (6 Euros p.n.) and arranged our canter tickets at the National Park office on the outskirts of town. Canters turned out to be some kind of off-road buses, which no longer had any ceiling or side walls and could take up to twenty passengers into the park. ‘Gypsies’ on the other hand, were small jeeps for a maximum of four persons. We took two rides into the park by canter, but unfortunately did not see any tigers, although we did see their footprints. Instead we enjoyed the beautiful fairytale like trees with air-roots, the spooky gummi-trees and other wildlife: Langurs (grey monkeys), spotted deers, large non-spotted dears, crocodiles, Kingfishers, peacocks and parakeets. Meanwhile we learned that the replacement parts for the bikes would still take a while, so we decided to extend our Rajasthan tour for a couple of weeks. Next destination: The blue city of  Bundi.

This entry was posted in Asia, Countries, India. Bookmark the permalink.

3 Responses to Lost in the Indian jungle