Tuktuks were everywhere, cutting in front of us, passing us on the right and left side, trying to push us into the open sewage next to the road and of course horning frantically. It almost felt like we were back in India, but it was Chiclayo the first big city after the border crossing from Ecuador to Peru. Luckily, traffic in most Peruvian cities was a lot more relaxed than this first encounter, but the waste disposal is unfortunately a big problem all over the country. Plastic bags, dirty nappies and other nastiness can be found everywhere, despite the omni-present, patronizing road-signs saying “No tirar basura”. 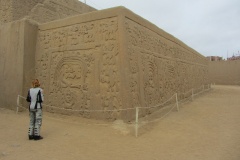 Since we had visited Peru before, we decided to keep to the coastal area, as we had not seen this part of the country yet. Near Trujillo the remains can be found of the ancient Chimu capital, Chan Chan. A vast area of crumbling walls, cut in two by the Panamerican highway.  We visited the two Chimu temples: Huaca del Arco Iris and Huaca Esmeralda and a part of Chan Chan that has been restored. The adobe walls reminded us of Meybod and Rayen in Iran, but here the walls were covered in patterns of rainbows, monsters, fish, pelicans, and fishing nets. Another strange appearance were the hairless dogs. An ancient breed that was apparently used as some sort of living bodywarmer by the Chimu due to the dog’s high body temperature. Although their general appearance is pretty ugly, some have this tuft of hair on top of their heads that makes them actually look kinda cute. 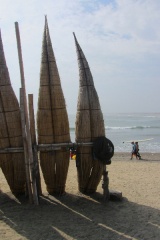 We spent the night in Huanchaco, a cute fishing village, where the local men still use an ancient type of boat made out of reed, a caballito, to negotiate the breaking waves. After a spaghetti dinner, we walked up to the  pier, where local ladies sold the perfect dessert: Hot chocolate and homemade cakies. Then problems started, Paul had some toothache, but nothing too serious he said.. The same day, we also noticed that our front forks seemed to be leaking again! This meant another visit to a Yamaha dealer, in other words, we would have to face the franticness of another South-American capital city. So we headed south on the coastal road, through vast stretches of empty desert, beautiful sand dunes, bare peaks and airborne plastic trash. 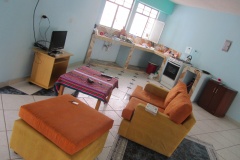 Along the way the toothache worsened and by the time we reached Lima, Paul was in urgent need of a dentist. The lady of the hostel helped us out, by calling all nearby reputable dentists for an appointment. Dr. Krebs was so kind to receive us after office hours, so we hopped into a taxi hoping for a quick solution. Unfortunately, the dentist had some bad news, apparently Paul had an enormous infection in his right jaw. So first things first, he prescribed a 6-day antibiotic treatment , after which further steps could be taken. In the end one of Paul’s molders had to be extracted. All in all, we spent 12 days in rather dull, melancholic, foggy, dirty Lima, before Paul was fit enough to leave again. Luckily, we did find a nice apartment, so we had our own kitchen, bathroom, cable TV and comfy bed (no woolen blankets!). At the same time, we were able to fix the bike problem. The Yamaha dealer did not have the right seals in stock, but they referred us to Endurance Motors, where Cristian took perfect care of the bikes. 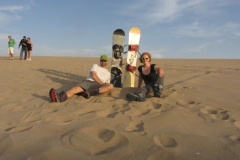 Happy to leave Lima again, we rode to the desert oasis of Huacachina, apparently the best place for sandboarding. On our way we were passed by another overlander on a BMW HP2, who was heading for the same town, so we made an appointment for dinner. Jeremy, from Canada, turned out to be great company, and we had some inspiring conversations over several glasses of excellent, Chilean Sauvignon Blanc. The next day a sand-buggy took us to the highest sand dunes in the world (over 160m), quite an exhilarating, bumpy ride, after which it was time for us to test our snowboarding skills. It took some practice and head-first sand encounters, but eventually we run a couple of smooth lines down the slopes. After a Lawrence of Arabia sunset, we headed back to town, another item checked on bucket list. We still prefer snow over sand though!

This entry was posted in Countries, Peru, South America. Bookmark the permalink.

One Response to Lost in Lima