There we were, 22u in the evening, sitting on a bench in front of a Honduran Aduana building in the middle of nowhere. We were hungry, our clothes were soaked and we felt defeated after a long and horrible day. Unwilling to stay, but seemingly unable to leave we contemplated about our possibilities. When Paul came up with a simple, but slightly risky plan. 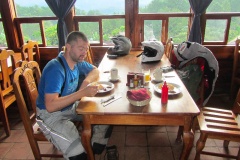 Let’s start at the beginning, how did we get here? In El Salvador we had decided we did not feel much desire to linger in Honduras. Since only 200 km of Honduran territory separates El Salvador from Nicaragua, it should be feasible to get in and out in one day, even though crossing borders can be a painfully slow process. Full of optimism we packed our bikes and left Perquin at 7 o’clock sharp. We filled up on petrol, stashed some lunch items and reached the Honduras border at 9 o’ clock. The exit procedure took 30 minutes; getting the migration stamps, canceling the temporary vehicle permit, done! Generally, entering a country takes a bit more time; migration form, migration stamps, vehicle permit request forms, watching the guy entering your data into the computer using only one finger, making copies, paying for the permit at the bank, making some more copies and finally receiving the much needed vehicle permit. Without the burden of a good 70 dollar weighing us down we were finally free to enter Honduras.

The riding was pretty smooth until we hit the final 20 km stretch, where well-camouflaged potholes arose, which could easily swallow a complete bike. Weaving around them, we reached the second border at 13.45, excellent! Despite all horror stories, the officials at the Honduran side were very friendly and our permit and migration stamp were cancelled in a wink. The Nicaraguan border layout was a bit confusing, at the same time we were swarmed by touts, officials, ladies trying to sell ‘obligatory’ insurance, which we had not heard of before etc. etc. Unknowingly this made us drive past the obligatory fumigation station without having our bikes sprayed. With sweat running down our pants we tried to figure out what to do first. Normally you start at migration, so we searched for the proper office, meanwhile harassed by an aggressive, apparently official fumigation guy. At the migration window, they requested 12 dollars per person for our entry stamp. To prevent paying any scam money we asked for a receipt, which they were unwilling to give. We kept insisting and out of nowhere the immigration officer snapped. He first closed the window, then started playing around with our passports, after which he pulled out his handcuffs in an attempt to intimidate us. Meanwhile his colleagues started to get involved and the situation escalated even further; we were ordered to come into their office and they called the police. Although the police officer seemed kind, he wasn’t willing to help us out, but instead chose to side with the border officials. They remained shouting that they would have us put in jail, although they could not really articulate what it was that we had done wrong, since we had only asked for a receipt. In the end they refused to let us enter the country and escorted us back to Honduras, what a nightmare!

Since the Honduran officials had been really friendly and helpful, we decided to put our cards upon the table and explain the situation. They helped us out with our paperwork, so we could head for one of the other borders. El Espino was only 100km further North, so we should be able to make that before nightfall. Returning to the bikes, a kind lady approached us with Marlieke’s bike rear reflector, apparently a street kid had felt the urge to pull it off, great…. With only two hours of daylight left, we sped to the other border, ignoring the heavy thunderstorm and accompanying downpour. A couple of miles before the frontier there was a police checkpoint. Normally we try to avoid any hassle by tail-gating big trucks, hiding our ‘gringo’ bikes and passing without stopping, because here the main reason for stopping you is bribe money. This time there were no trucks to hide our approach, nevertheless we didn’t feel the urge to stop and continued as fast as possible to the border. Unfortunately, that proofed to be the wrong decision. 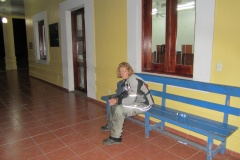 We parked our bikes behind the chained entrance of the border and started collecting the required paperwork, when a police jeep showed up. Turned out that the checkpoint guys had chased us down. All our paperwork was on the table and without scrupulous the police officer took our motorcycle title documents and our driver licenses. They went behind the little customs office to ‘deliberate’ about our violation. After waiting for them to return for a long time, the kind border official suggested that Paul should follow them and solve the issue, in other words pay a bribe. The police officer suggested 50 dollar, which we felt was a bit high for a bribe, so we offered our ‘last’ 9 dollars. This generous offer was, however, bluntly rejected. He decided to play hardball, by keeping our licenses and instructing us to visit him at the main police station, 50 km back, to pay the ‘fine’ the next morning, after which he disappeared into the night. Unknown to him, he only took two very nice copies of our driver licenses. Nevertheless, the border officials had followed the whole spectacle and were unwilling to stamp out our bikes before we would settle with the police. So here we were, 22u in the evening, sitting on a bench in front of the Honduran Aduana building, only 50 meters from the Nicaraguan border, but seemingly unable to leave. 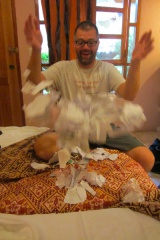 We carefully considered our options: 1) Stay here overnight and settle with the police the next morning, 2) Come to a ‘financial agreement’ with the border officials to get the official stamps, 3) Escape the country without the paperwork hassle. The benefit of our rejection at the previous border was that we already had the necessary Honduran vehicle exit stamps in our passports, although from another border. After weighing the odds and benefits we choose option 3, permanently donating our driver license copies to the corrupt Honduran police. Somehow we tricked the immigration lady in giving us the personal exit stamp that we really needed to be able to enter Nicaragua. After which, under cover of darkness, we hopped on our bikes and, without turning on our engines or lights, we rolled downhill into the freedom of Nicaragua. Anxiously, we waited for the obligatory fumigation to be finished, still in sight of the Honduran Aduana building. Hastily, we proceeded to the migration desk, where our somewhat correctly stamped passports were accepted without any issues. While I was still fearing a Honduran intervention and was startled by every unexpected sound, Paul was assuring me that we were now on safe grounds. To further test my nerves, the friendly aduana guy took ages to issue our temporary vehicle permit. Ultimately, after 2 hours at this border, we were free to go! At one o’clock we could finally take of our wet riding gear, and plump down on our hotel bed, a safe 20 km away from Honduras. Just before we dozed off, we summarized our experience: “I guess we won’t be going back there anytime soon”.

This entry was posted in Central America, Countries, Honduras. Bookmark the permalink.