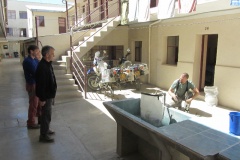 Uyuni is a dusty, wilderness-frontier town where nothing has happened, happens or will ever happen. Little reason to visit, yet flocks of motorcyclists, cyclists and regular backpackers converge in this dull town. Obediently we joined the crowds since we also wanted to see the famous salt lake with our own eyes. At the hostel we encountered a suspiciously high number of French speaking cyclists. Julien from Swiss had just ridden the difficult route from Chile up to Uyuni. As it turned out he was a professional mechanic and together we made some modifications of the carborator to prepare my bike for the difficult gravel/sand roads at 4000-5000m altitude. He also invited us for some genuine Swiss raclette when we will arrive back in Europe, sounds like an excellent plan… 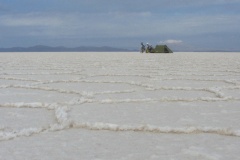 Fully restocked and prepared we first headed north to camp on the Salar de Uyuni. With nothing but emptiness surrounding us we pitched our tent using the bikes as protection against the sweeping winds. The sunset felt like a spectacular show just for the two of us and the night-sky was dazzling with bright stars and constellations… speechless. Next, it was time to head south to the tourist hotspot of Reserva Eduardo Avaroa. We had quite some difficulty in getting fuel; some gas stations were not selling to foreigners, at some the fuel pumps had broken down and the last station we visited was only willing to sell us fuel for a special, hugely inflated price. 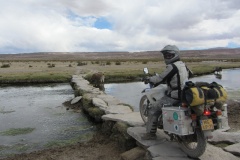 Heading south, past San Cristobal the roads deteriorated fast until finally we hit upon a waist deep water crossing. Unwilling to wade through this deep stream we took the chance to cross the nearby, wobbly pedestrian bridge. We succesfully pushed/rode the first bike over the stream without any issues, but when I drove Marlieke’s bike over the narrow bridge I hit a perturbing rock and accidentally steered the front wheel off the bridge into the stream. I fell into the water as well, but somewhat miraculously the rear end of the bike was still on the bridge. It took a good 10 minutes and all the strength we could muster to get the bike back on dry land again. We huffed and puffed on the riverbank, was this a bad omen for the next 400km? 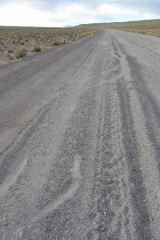 The road got worse and worse, crisscross tracks created by speeding 4×4 cars, heavy corrugation, well hidden lose sand pits and gravel ridges up to 30 cm high. At a certain moment the surface seemed to improve slightly and we accelerated up to 50kph. All went well until all of a sudden I saw a big dust cloud in my rear mirror. I turned my bike around and rode back as fast as I could. “Are you allright!!!”; I shouted to the silhouette that arose silently from the dust cloud. “I hate this road!” Marlieke replied angrily “Yes I am ok”. In contrast, Marlieke’s bike had taken quite an impact; the left-pannier was ripped off, the side stand was almost broken off and the engine was not starting anymore. We took camp nearby between some big boulders and we got the bike starting again. The next morning we bended the pannier rack back into shape using the biggest rocks we could find and refitted the pannier. Overnight Marlieke had developed some pain in her wrist, nothing serious, but the warning was clear: We should ride more carefully the next 300km. 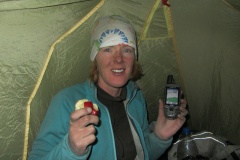 The horrible road conditions reached its lowest point north of Laguna Colorado in the direction of Arbol Del Piedra. We struggled to keep the motorcycles upright and frustrated by the slow progress I had a bit of a episode. „Why on earth are were doing this?” I shouted angrily to Marlieke as if she was to blame for our predicament. After a bit of a fight we decided to finish the last few miles North to the famous rock formation, but we agreed we would not make any other unnecessary excursions anymore, but would head straight South towards the Chilean border. Later that day we visited the highest aduana in world at 5050m, well-hidden in some sort of mining complex a good 70km before the border. We set up camp a few meters from the Sol de la Manana geyser together with Joris, a French cyclist. The wind was howling around our heads with incredible furry while we tried to put up our tents behind a small stone wall. Eventually the wind died later that evening, but it still was the highest (4860m) and coldest camp I have every experienced. 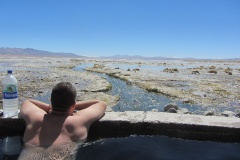 Next morning we drove down the mountain towards the nearby hot springs. We soaked for hours while observing the countless tour-jeeps delivering their customers for a quick dip in the pools. Luckily for us these packaged adventure itineraries do not allow for prolonged breaks, so most tourist already left after a mere 30 minutes. Later Joris also arrived at the pools and immediately set about on doing his laundry in the pool amid some rather worried looking 4×4 tourists. After eating a free lunch, left over by the 4×4 crews, we jumped on the bikes an rode the last few miles to a campamiento just before the Chilean border. Later that day Marlieke experienced the downside of all this high altitude relaxation; her legs developed a reddish (almost purple) complexion… somebody had neglected to apply ample amounts of sunscreen. Painfull! Just like our cracked lips, due to the altitude, the relentless wind and sun. We were looking forward to leaving the heights of the altiplano, back to ‚normal’ weather again.

This entry was posted in Bolivia, Countries, South America. Bookmark the permalink.

6 Responses to Highs and lows