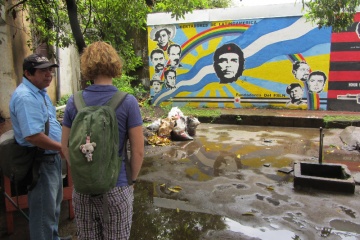 Due to it’s geographical configuration, Nicaragua seems to be split up in two countries: The pacific side and the Caribbean side, separated by huge Lake Nicaragua and a vast stretch of jungle. The main cities and roads are all on the small stretch of land between the Pacific and Lake Nicaragua, just like the main border crossing with Costa Rica. This is also the part of the country that was once occupied by the Spaniards, as can still be witnessed by the -mainly- mestizo population and the two colonial towns: Leon and Granada. Like it’s neighbors, Nicaragua also suffered from civil war, between the populist Sandistas and the dictatorial Somoza regime (backed-up by the US). By 1980 Somoza was overthrown, but the country was in shambles. Just two years later another decade of civil war spread through the country, as the US supported the National Guard to regroup and re-arm in order to overthrow the ‘communist’ Sandista-led government. Only since 1993 there has been peace in this region. So it’s not surprising that 50% of Nicaragua’s population is still living below the poverty line, especially in the Caribbean part of the country. 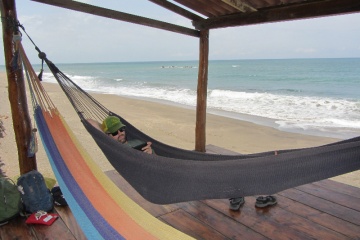 After our adventure in Honduras, we needed a place to hang out for a while, so we found ourselves a nice homely hostel in Leon: Hostel Calle de los poetas. This place, owned by Rigo (Nicaraguan) and Martha (Norwegian), had everything we needed: a comfy room, a fully equipped kitchen, a quiet garden, rocking chairs, TV and DVDs, lovely pets, and two great hosts. Leon has a nice authentic and tranquil atmosphere and lots of small, local businesses, including an excellent copy shop and an extraordinarily good comedor (San Benito, a local eatery). So we filled our time with washing our laundry, visiting the beach, watching some DVDs, doing some planning, enjoying the local cuisine, and making replacement copies for the driver licenses we left behind in Honduras. And while we had promised ourselves we would also practice our Spanish, time flew by and we didn’t get any further than buying small white cards for memorizing Spanish words. In Olla Quemada, next door, we tried the world-famous Flor de Cana rum and enjoyed some local live music. After spending about a week here, we felt we had to visit at least some of the tourist attractions, so we paid a visit to the local guerrilla museum, the grave of Ruben Dario (famous poet) and visited “the best art museum in Central-America” with some unexpected frescos, drawings by Picasso and intricate pottery by Helio Gutierrez (check internet!). 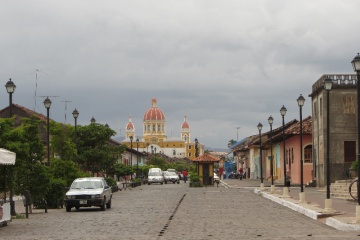 We paid a short visit to Granada, the so-called “Antigua (Guatemala)” of Nicaragua. Although we had a nice stay in Hostel Carmen, owned by a Groninger(!), we didn’t really like the atmosphere of the city. The local market was cramped and dirty, there were quite some touts and borrachos (drunkards) on the central plaza and there was a lack of friendly faces. One positive exception: We ran into Philip (the ‘crazy’ German on a bicycle) for the fifth time since Mexico, so time for some Tonas (local beer). On the road again, we drove into a police checkpoint. Since Honduras we were not very eager to hand over our papers, so we tried to act as if we didn’t understand what it was they wanted. However, these guys were very persistent and even became a bit aggressive. After playing stupid for 20 minutes, we settled for a compromise and gave them our freshly copied driver licenses, motorbike titles, and a black and white copy of our passport, as we explained them that our real passport was “at the embassy”. After some internal deliberation they accepted our story, but now they also wanted to search our luggage… Paul didn’t feel like giving consent, but they weren’t planning to let us go that easily. This was clearly going to take a while, so Paul decided to make some roadside coffee with biscuits. Then a friendly senior official arrived and after sharing some cookies, he had a quick glance at our luggage and we were finally free to go. 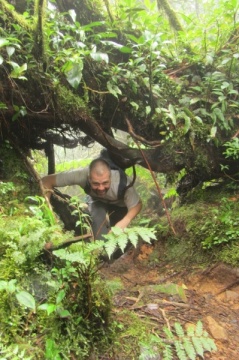 Our next destination was the volcanic island Ometepe in Lake Nicaragua, we arrived at the docks just in time for the small ferry. Well, ferry sounds more luxurious than it actually was; four guys rolled our bikes over a small wooden boardwalk and parked them on top of the passenger compartment. There was no railing, but they assured us that some greasy ropes would keep the bikes from tumbling into Lake Nicaragua… One hour later we were happy to be on safe grounds again and drove our bikes over a scenic (off-)road to Hacienda Merida. The last bit of road was quite rough; no tarmac, big stones, muddy patches, and some loose rumble, but we were surprised how well our worn-out Metzeller Tourance rear tyres performed. We settled for camping (5 dollars per night), but soon the daily downpour set in and didn’t stop, so we opted for the veranda hammocks instead. After passing many volcanos on our way through Central-America it was finally time to ascend one: Volcano Maderas. We found a local guide and hiked up the muddy jungle trail for five hours. The summit was a bit of a disappointment though; nothing more than thick fog, ah well that is rainy season. Although we were clearly not as fit as back in Nepal, we did manage to ascend and descend 1400 meters in 8 hours without any muscle aches to speak of. After another thrilling ferry ride back to mainland we were on our way to the next border crossing: Costa Rica was waiting!

This entry was posted in Central America, Countries, Nicaragua. Bookmark the permalink.

2 Responses to Hanging out