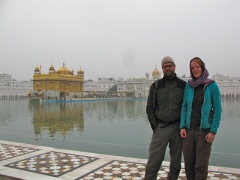 On the last day of the year our visa for Pakistan would expire, so there we were at a very quiet border office getting ourselves and our bikes stamped into India. Although India is famous for its bureaucracy this was one of the fastest and hassle-free border crossings so far. After many weeks of Islamic culture we now found ourselves amidst the Newyear festivities of the Sikhs at the Golden temple in Amritsar. The main pillars of the Sikh religion are to honestly earn with hard work, and equality of all people, including different races, religions, and sex. The Sikh are impressive people, large and strongly build with beautiful turbans in a variety of colours and a diversity of folding methods. One very insistent Sikh invited us to sleep at the complex, for free, an offer we, Dutchies, could not resist. Our Turkish friends Hakan and Sandan also decided to stay at the dormitory, so we parked the motorbikes in the communal bike park and joined the large crowd of Sikhs to visit the temple. It was rather cold, so we did not really enjoy the fact that we had to walk barefooted on the white marble floors, but at least we were ‘allowed’ to cover our heads (women and men). The holy center of the complex consisted of a rectangular pond, called the pool of nectar, surrounded by a marble walkway. In the middle of the pond there was a small temple with a golden roof, which could be reached by a bridge. Here the holy books were on display. Clergy men were chanting, musicians were playing and flowers were sprinkled around, while pilgrims kissed the doorstep or gazed in full admiration at the holy scriptures. Although we did not completely understand all of the rituals, the atmosphere was spiritual and inviting at the same time. After the visit we joined for a free meal in the large dining hall, where plates and food are handed out to thousands of pilgrims every day with army precision. In the background you could hear the rhythmic sound of plate washing by a large group of volunteers. Unfortunately no alcohol allowed, so Newyear’s eve was spent sober. 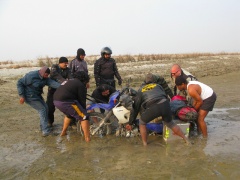 After two days of surviving the Indian traffic we arrived in Delhi, where the traffic chaos came to its climax. Every square inch of tarmac was occupied by tuktuks, trucks, buses, small motorbikes, bicycle riksjas, pedestrians, sellers with carts, dogs, cows and what more and as soon as there was a small passage all of them would try to conquer this piece of empty space. We managed to maneuver through this chaos to arrive at the Landmark Inn hotel. Through our friends in Pakistan we were connected with the Indian motorbike travel club “60 kph”, who happened to have a meeting in Delhi this time of year. We were heartily welcomed and joined in the 11th anniversary party with cake and beers. The guys invited us to tack along on their five-day camping trip, even though our Yamaha’s really stood out against the flock of Enfields. The first night was to be spend on the river banks of the Ganga. Ten meters short of this site, I managed to get my bike stuck into the mud and when Paul and some other guys came to my rescue, Paul’s bike was sucked deep into the drift sand… The 60kph manpower was not enough to get the bike out, luckily the local villagers took on the challenge and about two hours later Paul’s bike emerged from the mud. Unfortunately, the fun was not over yet, Paul’s bike’s clutch was burned… So we were forced to return to the chaos of Delhi to visit Kaulson’s motorcycle workshop, the  best big bike repair shop around. Paul and his bike limped back at an impressive speed of 30 km/h – on the flat bits-, and I followed patiently, feeling sorry for Paul and d’n uitvreter, 150 kms never took so long! Vijay at Kaulson was a great help and reassured us everything would turn out fine. Since spare parts had to be flown in from Singapore, which would take a while, we were demoted to backpackers for a few weeks. Given the challenging Indian traffic, this felt like a blessing.

This entry was posted in Asia, Countries, India. Bookmark the permalink.

3 Responses to Good start and bad luck in India