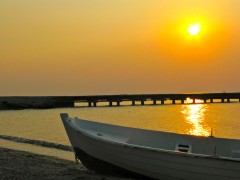 We wake up to the sound of breaking waves. Last evening we pitched our tent near to a desolate Aegean beach. We only have to share this splendid little piece of Turkey with another Dutch couple that are touring the country by bicycle. Today we will visit various memorials for the ill-fated allied landing that took place at Gallipoli in 1915. The whole peninsula is scattered with monuments for the British, French, New Zealand, Australian and Turkish soldiers who died during the fierce battles, which lasted a few months. The allied objective was to force entrance to the Strait of Dardanelles, so that they could bombard Istanbul and thus force Turkey into submission. That would open a supply route for the Russian army via their black sea harbours. 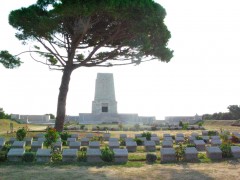 At first glance, the Anzac grave sites look quite similar to those at Verdun or Ypres (France), but when inspecting the graves more closely we noticed that personal poems are engraved on most of the stones. Some poems are nationalistic “His country called him” some are heroic “He gave his life that other may live” and some are comforting “Absent in self, but not in memory”. A number of poems are underwritten by a “loving mother”, or “mom and dad” which makes the tragedy endured by the surving family members even more tactile. 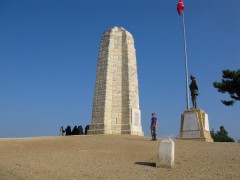 The turkish memorial sites seem to put less emphasis on the individual tragedies but rather focus on national pride. Though lists with the  names of the fallen soldiers are engraved on glass tables, these are overshadowed by enormous Turkish flags, and huge statues of Ataturk overlooking the allied landing from his stronghold on top of the ridge. 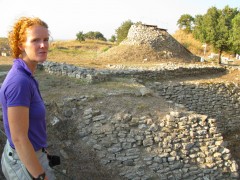 Around noon we take the ferry to mainland Turkey and drive to Truva. Here we visit the ruins of the ancient cities of Troje. Cities, that’s right, plural, as we find out that the ancient city has been rebuilt more than nine(?) times. Despite the various signs with background information we struggle to envision which pile of stones relates to which city era and what type of building it used to be part of. Tired but satisfied we end the day with the favourite local beer….. Tuborg %100 malt.