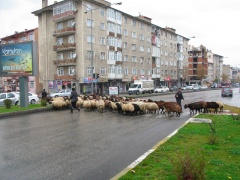 “Look at that” Marlieke shouts enthusiastically, while pointing at the flock of sheep crossing the busy intersection in the city center seemingly unmoved by the franticly honking traffic. We both gaze delighted at these rural visitors set against a bustling backdrop of Erzurum’s city life.  This scene seemed to perfectly summarize our impression of Turkey so far: Quite modern and very traditional at the same time.

Erzurum does not receive a lot of attention by tourists, mainly because it has few historic sites of great interest. In addition, the altitude of 1950 meters results in a very short time period during which weather is considered bearable by most visitors. Our reasons for visiting were also more practical than touristic in nature. That is, we needed to get Iranian stamps in our passports. Second mission was to get our hands on a significant amount of Euro’s, which we will need in Iran since internationally connected ATM’s and credit cards are yet to be introduced.

On our first morning in Erzurum we got up early and dashed to the embassy. On route we encountered the aforementioned sheep. On the Internet we had read horror stories about the Iranian embassy personnel, so we braced ourselves for a morning of Kafkaesque rituals. Hence our astonishment when we completed the application procedure in a few minutes and were told that we could retrieve our passports including the visa the next day at 5pm. 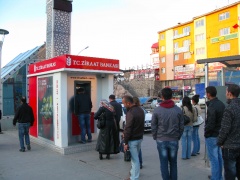 Our second mission, did not run as smoothly… When heading to the city center we noticed the long rows of customers at each and every ATM.  We speculated what could be happening: Was the economic crisis finally hitting Turkey? Had the Turks decided to go on holiday “en masse”? Somehow, amazingly, we did not immediately realize the connection between the omnipresent livestock, the run on the banks and the effect this would have on our quest for cash.

We visited several banks, which were all quick to refer us to their competitors upon hearing our exotic request in English. Only at the 6th bank visit we found an employee who could explain in basic English that our chances of withdrawing a considerable amount in Euros were very slim. He proposed to do a backstreet deal by buying gold using our credit card and then immediately selling the gold against Euros.  We considered this option for about 1/10th of a second and jointly concluded that that was way too adventures for our liking.  At the end of our conversation he casually mentioned that we needed to find a solution fast since all banks would soon be closed for a 6(!)-day period. When we asked why, he enthusiastically yelled “Bayram! Bayram!” while making a cutting gesture to his throat… apparently the Islamic feast of sacrifice was upon us.

All of a sudden we connected the bank run to the flock of sheep and herds of cattle in the city and realized our enormous planning screw up. We immediately connected with our Dutch bank, but we were told that they could do little to help us, especially on this short notice. In utter desperation we made several unsuccessful attempts to transfer Euros to ourselves via Western Union. Finally we gave up and (in words of a fellow traveler to Erzurum) “rang home like a destitute E.T.” My parents immediately sprung into action and amazingly, a few hours later we were able to collect our cash at the nearest Western Union agency. Thanks mom and dad… you are the best! 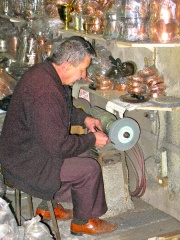 With our visa and cash troubles sorted, our sense of accomplishment was matched by the increasing festive spirits that buzzed throughout the city. We followed the cash flow from the ATM’s to the local cattle auction. Some sellers persistently tried to convince us to buy their skinny cows but halted their sale pitch when we explained to them that we were travelling by “motosiklet”. They agreed that we would have little space to transport a sheep, cow or full size bull. The household stores were packed with customers admiring cutlery and axes, and the DIY stores sold ropes by the kilometer. All activity reached its inevitable climax the next morning when we witnessed the slaughter of a bull just across our hotel. The locals were cheerful and painted bloody dots on their foreheads.  We, on the other hand,were a little bit in a quandary,  we were delighted to see so many smiling faces while, at the same time, found it impossible to cheer at the death of an unaware living being. With a knot in our stomachs we packed the bikes and drove out of the city while trying to avoid contact with the streams of blood running across the streets.

Note: Some of the photos below may not be suitable for the faint-hearted….