End of the silk road 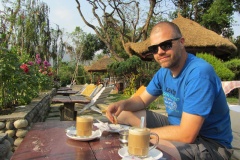 In the past weeks we had had many coffee break talks about in which direction we should continue our journey. The original plan was to travel to New Zealand via Southeast Asia. However, the temperatures in Cambodia would soon exceed our comfort level and the oncoming monsoon in Laos and winter in New Zealand did not sound very appealing either. Looking at the climate charts the conclusion was obvious: From April onwards it would be best to travel on the northern hemisphere. Just a day prior to our departure for the Annapurna trek we decided upon our alternative route and booked our tickets. 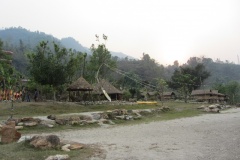 After another night out in Pokhara, celebrating our return from the Thorang-La pass, we again woke up with a heavy head, but we had to start organizing for the second part of our journey: Contact the shipping agent, arrange a place to stay and apply for the required visas. We also informed our parents and they actually got excited about our next destination and informed us they might join us there. Arranging, and re-planning took some days after which we travelled to Kathmandu to meet up with the shipping agent. En route to Kathmandu, on the shores of the Trisuli river, lies the Royal beach camp resort. Here they specialize in white water rafting. The campground is very nice and tranquil, with thatched roof bamboo huts, a white sandy beach and very attentive staff. So when we stumbled across this place, we decided to stay a few nights to enjoy the peace and quiet, before entering busy, dusty Kathmandu. 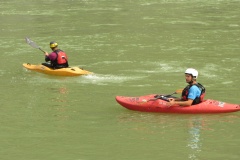 Among the staff there were two Westerners: Chris (Switzerland) and Noora (Finland), who were taking kayak courses and volunteered as rafting guides for a few weeks. It was great chatting with them, especially since Chris had worked in remote villages for two years and had some in-depth knowledge about the Nepali culture. With his stories he underwrote our views about the Nepali as kind and strong people. On a critical note, however, he also described the laissez-faire attitude of Nepali, a likely contributor to the dire political and economical situation of the country. 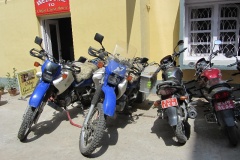 During a stop next to the road to Kathmandu, Marlieke took a quick look at the level of petrol in her tank. We still had to cover 50 km and all petrol stations we had encountered so far, turned  out  to be out of fuel. “What do you think?” she asked with worried undertone. Uncertain if the few remaining liters of gasoline would be enough, I decided to play it cool and answered with fake confidence “It will be fine, let’s go”.  To save gas we crawled westwards at a frustratingly slow 35 km/h, the same speed as the trucks struggling uphill.  At the city border my bike was out of gas and Marlieke, rather reluctantly, gave me a tiny bit of her fuel. This was just enough to crouch in to Thamel, the tourist trap area of Kathmandu. Driving on fumes we arrived at Oskar’s guesthouse a cheap, rather dirty hostel, but with secure parking (very rare in Thamel). 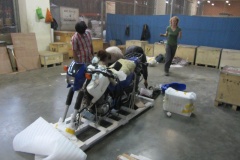 The shipping agent of our choice was Eagle Eyes Exports, which provided excellent service at a reasonable price (after negotiation). He planned the complex shipping schedule, arranged a carpenter for making crates and took care of customs procedures. The day before shipping, we took the bikes to a workshop for a super deluxe wash-job, even the sheep skin seat covers smelled nicely afterwards. Rather frustrating though the route to the airport turned out to be a muddy, slippery road, which meant that we had to wash them by hand again before crating. Preparing the bikes was rather hard work, especially the front wheel nut was very reluctant, so the whole process took almost an entire day. Luckily, just before closing time we succeeded in getting the two 284-kilo-boxes through customs… done! 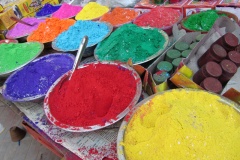 No more bikes, so again we transformed ourselves into backpackers. The first event we participated in was Holi, the most colorful festival in the world. However, no Nepali seemed to be able the explain the significance of the  holiday nor the colored powder. On our way to the  safe, high, balcony of the guesthouse where Chris stayed, we were already enthusiastically targeted by the locals with colored powder, water guns, and buckets of water. Resembling two rainbow gummybears, we teamed up with our friend and retaliated by deploying our tiny water pistol and our red/white/blue tikka powder. We ended the day by dancing, drinking beers and of course taking a long hot shower. 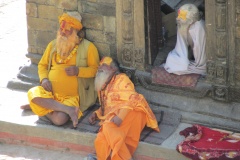 With a week to kill until our flight day, we explored the sights in the Katmandu valley. Bhaktapur,  a suburb of Kathmandu, used to be a separate, tiny kingdom. The historic city center is jam-packed with shrines, temples, plazas and royal palaces, well worth the visit. Nearby, Nagarkot, is famous for the splendid panoramic views of the Himalayan range. Sadly the weather was misty during dawn and sunset so we cannot say anything about its splendor. The Hindu temple of Swayumbanath is seated on top of a hill in the northern part of the city and is also known as the monkey temple. As soon as we arrived beneath the long stairs leading up to the stupa we understood why: Monkeys sliding down the rails, eating the food offerings etc. It was a busy place, packed with religious shrines, devotees and monkeys. We liked the painted eyes on top of the stupa and it’s golden hat, but agreed that there were too many shrines and messy, tikka powdered statues. The similar looking, buddhist Bodnath temple appealed much more to us. It was more focused with just one large, white stupa, lined by countless prayer wheels, which were tirelessly set in motion by beautifully dressed pilgrims circling it’s giant base. Pashupatinath, the burning ghats, is another very sacred place in Kathmandu, the Varanasi of Nepal. Here we observed a cremation ceremony, discovered the largest golden cow ever and tried to ignore the money-minded baba’s. 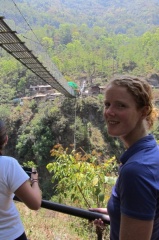 Nepal offers a lot of outdoor activities and we both felt it was time for something extreme. So on April 3rd, Marlieke’s birthday, we treated ourselves to a bungee jump. Not just a bungee jump, but the highest in Asia and apparently the cheapest one per falling meter. Subscription was easy, but the disclaimer that we had to sign did make us worry a little bit: “You are aware that you are jumping down a 160m high bridge with just a single elastic band attached to your ankles”. Then the real fun started. Like a group of Weightwatch participants everybody had to come forward to be weighed, after which the weight would be shouted to one of the staff members and would be written in capitals on your hand. Not a light task for all of  the brave-hearted. The staff was very professional, so the harness was put on, the rope attached to your ankles and before you knew it you were standing on the tiny platform of the hanging bridge with your toes already in mid-air.  One, two, three and there we jumped! It felt very unnatural to throw yourself off such a height without anything to hold on to, but within 3 seconds you were already down in the gorge suffering from an adrenaline-rush and wondering what had actuallly happened. In the evening we celebrated our achievement and Marlieke’s birthday with Emile, a great Canadian traveller/bungee jumper and two of his Lebanese friends. Our last evenings in Kathmandu were also spent in the bar, because we were finally reunited with our Finnish friends that we had left behind in Sukkur, Pakistan. It was great seeing them again, so we spent our last nights chatting, laughing and drinking in Tom and Yerries bar. They would head back via China and Russia, while we would take a flight to continue our travels on a different continent, but we are confident we will meet again.

5 Responses to End of the silk road