Karadut/Pertek/Kemah/Kars, 15 degrees Celsius and quite some rain 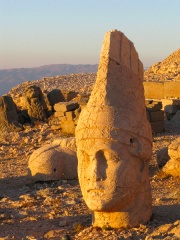 All tourist posters of Turkey show this intriguing picture of a large stone head. This artifact is part of a large tomb that was created on top of mount Nemrut by a megalomaniac pre-Roman king. Since the Lonely Planet states that ” The stunning scenery .. and the undeniable sense of mystique .. make a visit here essential” we feel we cannot skip this site. For our overnight stay we pick Karadut Pension, where our tent exactly matches the size of he tiny bit of yellow grass in the garden. Wido, a German traveling for the last twenty years, arrives here as well in his rental car. He offers us a ride to the summit (2150m) to see the statues at sunset. From the parking lot we have to walk up the remaining 200 meters, quite a task since Wido turns out to have only 60% lung capacity left, but with his oxygen concentrator he makes it to the terrace. There are statues on two sides of the mountaintop and in between there is an artificial peak consisting of crushed rock of 50 meters high. The statues represent the king, his wife and the gods, unfortunately all heads have tumbled down due to an earthquake. Nevertheless, the statues remain impressive and we enjoy the views of the surrounding mountains and lake Ataturk. Since the weather is crisp and sunny we decide to spend some more days in the small village and relax a bit. Here men still walk around in baggy trousers (typical Kurdish) and are busy collecting firewood with their donkeys, while women dry corn just harvested from the fields and children run around shouting “Hello, tourist”. 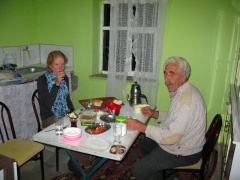 The Eastern part of Turkey has a large Kurdish population and as most of you will know from the news there have been many clashes between the PKK and the army. Apart from that it is also bordering Syriah, and just a few days ago there has been an incident with Syrian mortar shells hitting Turkish territory. All in all a region which warrants a higher level of observance, which is confirmed by the regular military watchtowers along our route. Combined with the dreary weather and the desolate landscape we do not really appreciate the riding between Karadut and Elazig. We had already seen some tents along the way and were wondering whether these were home to shepherds or very poor people. The UNHCR sign on one of the tents makes us realize that these tents are actually for Syrian refugees. Quite a shock to see something like that in real life. We feel sad that these people, who had to leave everything behind, have to live here in such a desolate landscape with little place for shelter and limited opportunities for gathering food or finding drinking water. After a crossing by feriboat, the landscape changes and we both feel more at ease. We spend the night in a small village, where a local farmer offers us a meal of homemade honey, bread and cheese and we spend the evening playing backgammon. 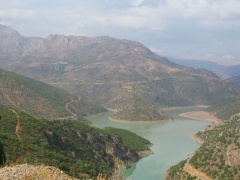 We continue our route to follow the Euphrate river in northeastern direction up to Erzincan. The scenery is stunning, the mountains change colours from grey to yellow to pink to bright red, while bushes dot them with shades of green. When rays of sunlight break through, it feels like we enter the promised land. The mountains do not have sharp peaks like the alps, but rather look like a piece of wrinkled cloth that has been thrown on the floor. The river runs through the landscape as a green ribbon, with tall trees and green grass lining its banks. This stunning scenery continues until we reach the city limits of Erzurum. Unfortunately it is not easy to take many pictures while riding a motorbike, so we leave it up to your imagination to visualize this landscape. 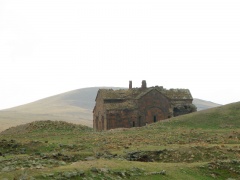 After the hassle with money and visas in Erzurum (see previous post) our next stop was in Kars near the Armenian border. Close to this plain ugly city with dodgy hotels, is a historic site of a tradepost once part of the silk road. It used to be the Armenian capital and housed more than 100,000 merchants and nobles. It has been under Armenian, Byzantine, Seljuk,  Georgian and Kurdish control, but was deserted after Mongol invasion and a consecutive earthquake in 1319. It is a large site with impressive ruins from all the different time periods, an Armenian round church, a geometrically elegant Seljuk palace, a large, quadrangle cathedral with a tiled roof and one of the earliest mosques. Since the site is only separated from Armenia by a small river running through a canyon, there are watchtowers all around and for safety reasons we are not allowed to enter the citadel castle on top of the hill. We spend three hours at the site, after which we were happy to get back in the warm van returning us to the hotel. The last few days have been quite cold and wet and we are looking forward to entering Iran, because we expect more comfortable temperatures.