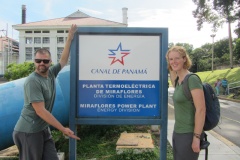 Right in front of us we saw the silhouette of a large metalwork bridge: El puente de Americas. On the right side we could see massive freighters laying side by side, all waiting for their turn to cross from the Pacific into the Atlantic ocean. On the left side mammut cranes were guarding the harbor as huge modern era Colossuses of Rhodes: We were crossing the Panama canal! Both in the confined tranquility of our own helmet we had bit of an emotional moment; all the way from Chicago we were now finally crossing from the Northern to the Southern American land mass. Only the road gap of the Durian jungle was now separating us from South America.

Since we had a boat to catch we didn’t visit many tourist attractions in Panama. In the northern mountains we tried to stay at a hostel in the middle of the cloud forests, but the muddy, slippery, uphill trail turned into a bouldering trail, only suitable for hiking. As it turned out there was no safe parking for the bikes, and with all the rain coming in we took our chance and left the jungle as soon as the sky cleared for half an hour. Instead we turned for Super 99 in the city David, maybe not the usual tourist attraction, but after the scarcity of Western goods throughout Central-America, we were amazed by this supermarket chain that had everything a weary traveler could wish for: Anti-rust paint for our exhaust pipes, all types of cereals, beer brands from over the world and even pancake ingredients for a true Dutch evening meal. Birthday boy Pim (our little nephew) had inspired us! Of course we also visited the Panama canal: The Miraflores locks, including a small museum with the history of the canal. It is really an impressive sight, seeing Panamax container vessels navigating through the lock with just half a meter of space on both sides, small trains guiding the ship to prevent damage of the lock’s walls, and the water level dropping at an incredible speed to release the ship into the Pacific, after which the next ocean steamer is already approaching. It is clear why Panama is one of the richest countries in Central-America, even though the Panamanian government only became the official owner of the canal as recent as 1999. 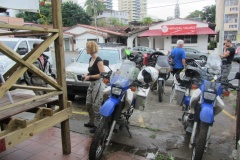 Panama city is a modern city with skyscrapers and shopping malls with fancy stores, but it is also a little rough around the edges; some neigborhoods are no-go areas, sidewalks are non-existent and potholes omnipresent. We settled in the commercial centre, in Panama House hostel, the get-together spot for all motorbike travelers that would cross the Durian on board of the German sailing boat the Stahlratte. Pretty soon we found ourselves in the company of David (UK), Eric and his fiancé Tanya (Canada), Ingwer (Ginger for close friends, Germany), Jonas and Hector (Mexico), and Kevin (UK). We had a great night chatting over some rum, toasting on a good crossing. In the city, we also met up with Marije (ex-RIVM colleague) and Menno, who just crossed from Colombia to Panama with the Stahlratte and were heading further North on their bicycles. They had some great tips of places to visit and made us really look forward to traveling through Colombia. First, however, we would enjoy our 4-day cruise from Carti to Cartagena. 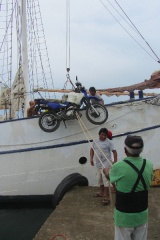 We had quite an adventurous ride to the pier in Carti. Riding in convoy through the city was the first challenge, then passing toll booths without buying the expensive multiple use card, and finally facing the windy and steep jungle road from the Panamerican highway to Carti. Along this road, Kevin hit a gravel bit so hard that his top case and spare tyres were catapulted into the air to disappear into the jungle. A little bit late we, and all our luggage, made it to the pier. What a beautiful sight, the Stahlratte laying there, surrounded by deep-blue sea and in the far distance some palm fringed islands. While all riders were watching their bikes anxiously, the small on-deck crane lifted them up from the pier high into the air, after which the crew professionally manoeuvred them on board. Luckily captain Ludwig was present to comfort us by shouting with a thick German accent “Eazy peazy lemon squeezy”. Let the cruise begin! 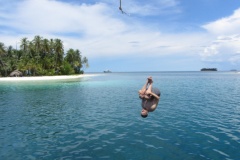 The first night was spent on one of the islands inhabited by the indigenous Kuna Indians. The huts were very basic, no windows, no doors, some even didn’t have a completed roof, but we enjoyed the peaceful village life, the people in beautiful regional dresses and the fresh fish meal. Then we finally sailed off to some of the uninhabited islands of the San Blas archipelago: Paradise! We had never thought bounty islands like this really existed. We even saw some dolphins, swimming next to the boat. Although captain Ludwig wasn’t that exited about these sea creatures: “O, dolphins how amazing, where is my camera?!” he said in his funny, exaggerating way. The next two days were filled with swimming, snorkeling and jumping of the boat rope swing. Ludwig and his crew organized a fabulous BBQ on one of the islands, including the captain’s famous rum-punch. Let’s say not everybody can remember what happened that night, but don’t worry; we all ended up in the right bunks. The last day was spent on open sea, so no more swimming, just sitting on board, suffering from a little bit of a sea sickness.

This entry was posted in Central America, Panama. Bookmark the permalink.