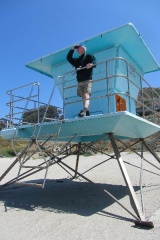 Although we were not thrilled by every aspect of the States, we have been amazed by the beautiful flora and fauna and the abundant wildlife. After five national parks, the pacific coast was our next destination. Driving through the fertile lands of California, filled with vineyards, fruit trees, artichokes and strawberries we set up camp in Watsonville, just South of San Francisco. We were a bit disappointed by the fact that it was actually a bit cold here, isn’t California the place where you can always walk around in shorts? Nevertheless, we had a good time visiting the beach, where Jan and Paul pretended to be David Hasselhoff aka Mitch. At the campsite, Paul and I had some fun on the big bouncer, making friends with a 4-year old. Then we found out Memorial Day weekend was upon us! This meant that the whole population of the States would go for holidays for three days, which is bad news if you don’t do any advanced booking… Nervously, we checked all hotel booking sites and at the last minute we were able to book a room in a Motel 6 and extend our stay in Watsonville for one more night, pfew. 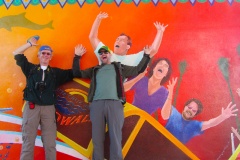 A visit to the States is incomplete without visiting Walmart, so we drove to Monterey to do some shopping in a Walmart supercenter. Unfortunately, we did not see the same shoppers as Jessica Frech did. In Santa Cruz we strolled along the beach and the Boardwalk, one of the oldest amusement parks in the States (built in 1907), where we especially had fun with the aged games in the Arcade hall. At the pier, Woodies, named after those 30’s cars with wooden side panels, served some excellent fish and chips in a cozy, surfy atmosphere with views of frolicking sea-lions. On return to our cabin, we found out the campsite had exploded; children running and cycling, BBQ’s, loud music and pick-ups all over the place. Time to leave! 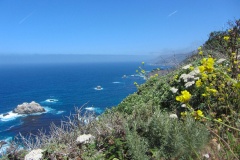 Winding and turning, until we got the better of it, we explored Big Sur and the famous Pacific Coast Highway. Big rocks, splashing waves, ice plants and other flowers, expensive villa’s and nice outlooks were scattered along the route, what a road! The highlight of the trip was the beach full of sea elephants, the bigger brothers of the sea-lions. They looked funny, snuggling up to each other, throwing sand around or just enjoying some sunbathing, however the smell was horrible! We also intended to visit Hearst castle, that is to say the American equivalent of a castle, a mansion built for the newspaper magnate William Randolph Hearst in 1919. However, like everything in the States this attraction was quite far, so by the time we reached the place it was already 4pm. Adding an entrance fee of 25 dollars per person, we decided to stick to the souvenir shop and a coffee. The Hearst heirs must be thankful for these rainy-day savings. 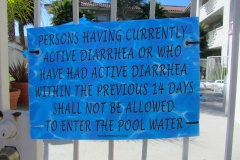 Due to the Memorial day rush on hotels we had a long riding day ahead of us, but we enjoyed the landscape, the Beach boys on the radio and the candies brought from the Netherlands. When the need for coffees and a toilet started to rise, we were in the middle of nowhere and the nearest gas station was nowhere to be seen. At exit Ardo, we ended up in a ghost town with local bar. Although the outside looked a bit grim, the Mexican owned place had nice, clean red/white block pattern table cloths and the friendly lady brought us four fresh, hot coffees. At the end of the day we checked in at our Motel 6 booting a swimming pool with dubious history (see picture). Since the sun did not set as yet, we visited the beach and ignoring the slightly cold wind we put on our bikinis to enjoy the last rays of sun, after which we ended up at Denny’s for a true American burger (Matt we are deeply ashamed of ourselves…). 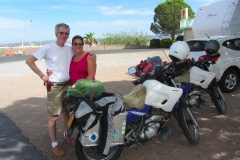 Now that we were so close we couldn’t resist visiting LA to see Beverly hills, take a picture in front of the Hollywood sign and do some souvenir shopping. Jan and Paula’s suitcases were gonna be filled up! After all the fun we had, family time was running out, just another two days before my parents would be flying back to the Netherlands. A last road trip through the Mojave desert brought us back to Boulder city close to Las Vegas, where our two-wheeled friends were patiently waiting. Another goodbye, but this time no new guests to fill the void.. After a big hug and some tears the Nissan and the Yamaha’s drove off in different directions, wheels in the wind, although we did not quite feel mentally ready for the next adventure.