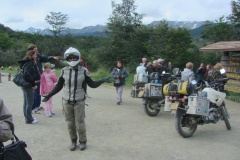 For months we had set our goals at reaching Ushuaia, the end of the world. When we initially drove into town we were thrilled to have reached this milestone. The same day we pushed ourselves to visit the true end of the road in national park Tierra del Fuego. The experience of reaching this remote „end of the road” sign was, however, somewhat thwarted by the scores of bus-tourists flocking around us, demanding snapshots of themselves next to these exotic motorcycle creatures. Back in Ushuaia my motto of the past months „Ushuaia ist nichts” became reality, it was nothing special, mainly rather cold. We got our passports stamped at the local postoffice, had a celebratory dinner and drinks at the Irish pub and set about planning our escape to the warm North. Led by Arun on his BMW 1150gs we raced a good 600km North in day, including two border crossings (Argentina-Chile, Chile-Argentina), a ferry and a good 150km of gravel. The following days were similar, lots of mileage, strong wind gusts, and crossing rheas and guanacos. The highlight of the day usually consisted of a hot cup of coffee at the YPF petrol station. Yet by now Arun and us seem to be rather resilient, we took the beating as it came without nagging. 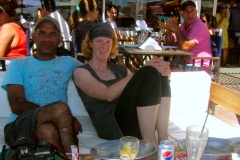 Puerto Madryn is a good 2000km up from the end of the world and thus the weather was much more agreeable; a good place to regain some strength. The beach was lively and content with our achievement Arun and us sipped some non-alcoholic beverages at a rather fancy beach club. The nearby Isla Valdes is a famous nature reserve that boast colonies of both sea-lions and sea-elephants, Magellan penguins and of course countless rheas and guanacos. When the sea lions give birth to their pups, Orcas can be observed patrolling near the beaches. Unfortunately we visited, once again, not in the right season. For us the reserve did not really impress since the views bear a high resemblance to the pampas we had been crossing for the past month….hearing the sea-lions growl was nice though. From here, Arun headed directly for Buenos Aires while we went westwards to check out the Argentinian lake district. 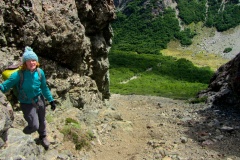 After yet another two days of dead-boring pampas and back-breaking headwinds we reached El Bolson, the nature-hippy capital of Argentina. We did as the locals, parked our bikes and headed for the mountain trails. The hiking was excellent fun and the basic refugios seem to operate in harmony with their tranquil surroundings. Life here seems to move at a slower pace and before long we could easily entertain ourselves for hours just staring at a stream gently flowing through a bright green meadow. Our nature retreat lasted 4 days when low food stocks forced us to return to civilization. By now we had a good week left to return to Valparaiso where we would prepare the bikes for shipment. Our first stop after crossing into Chile again, was Pucon, the lakeside touristy town we had already enjoyed on our way southbound. In search for a place to stay we rolled onto the „Anohui” campsite. During inspection of the campsite we heard somebody shouting my name. Much to our surprise we recognized the ever grinning face of Silviu, the Rumanian motorcyclist we had met earlier in Mendoza… time for BBQ and Chilean wine! Later Michael, a German-Brazilian BMW rider joined in… time for a second BBQ and Chillean wine! Needles to say we had a blast. After this, I spend a good day fiddling with the speedo-meter of „Precious” and the carburation of „De uitvreter” only to find out later that I had only made things worse… ah well just 1500km left to Valparaiso. After a break in our favourite walk-in hospedaje in Chillan, we forced the bikes over the last remaining 400km of tarmac towards villa Kunterbunt. 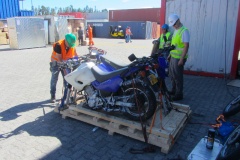 We had been looking forward to be back in Valparaiso, city of hills, panoramic views over the bay, colour-full houses and the even more colour-full home of Martina, Enzo, their son, daughter and their two dogs. We received a warm welcome and were happy to finally put the bikes (and ourselves) to rest for at least 6 weeks! Soon Villa Kunterbunt filled with other bikers from Austria, Germany, Spain and Switzerland, so we organized another BBQ this time accompanied by Chilean beers instead of wine. One night we also tried the local fish restaurant, where they served us an amazing pile of fresh seafood, accompanied by jack potatoes and a crispy salad. We were a bit apprehensive about the hygiene, but our tummies held up well. Paul and Enzo eventually managed to refit an existing crate to fit both bikes, so the next day we headed for the dry docks, dismantled the bikes, squeezed them in and nailed the box shut. Although Enzo got a bit stressed when time started to run out, most of the process went pretty smooth and the two bikes, four panniers and camping gear fitted in perfectly. Then the truth struck us: We were mere backpackers again!

This entry was posted in Argentina, Chile, Countries. Bookmark the permalink.