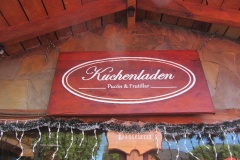 Chile has a distinctly pan-European feel to it. The blueberry kuchen made in the german settlements are just as delicious as those produced back in the heimat. The cheese produce of certain areas are almost of Dutch quality and the water from the tap is drinkable again. The houses are constructed way better than in the rest of south-America, yet the level of detail is Belgian; not quite finished. The highways can rival with the German Autobahn, yet the secondary roads can be on par with some of the most challenging roads we encountered in Romania, way back at the beginning of our journey. All in all we feel that Chile provides a good setting to contemplate our inevitable return back to Europe and the Netherlands. 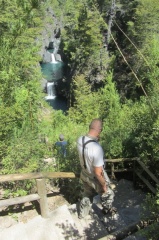 A few days into the new year we left Valparaiso to explore southern Chile. After two days of riding we found ourselves in Siete Tazas (the seven cups) national park. This park is a favorite by the national tourists and since we were there on on a Saturday we found ourself amidst scores of Chileans, all enthusiastically taking pictures of their families statically posing in front of the waterfalls. The Chileans expressed a shared delight for all this natural splendor. We, in contrast, were struggling to fully appreciate the beauty of this site. Later that evening we made up our minds: After 18 months of traveling we were getting a bit tired and less able to fully appreciate our adventures, time to plan our return home. We identified two issues: First the flight tickets to Europe can be quite costly. Second, we feel that we need to ride our bikes over the land border into the Netherlands, but the European climate is not very kind to motorcyclist up to early April. A short internet search provided the perfect solution: On March the 21st we will board a cruise ship in Buenos Aires that will take us to Barcelona in a good 21 days. Underway we will briefly visit Rio de Janeiro, Tenerife and Madeira. And for all Dutch, budget-minded followers, here is the good news: All this luxury travel will only cost us a few hundred Euros more than a flight ticket :-). 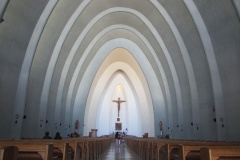 Now that the end of tourney is planned, we knew the bikes needed only one last big service to cover the remaining 8000km. In Chillan we found a nice mechanic at MDR Motos to do some maintenance and realign the front wheels of both bikes. Accidentally we also discovered cracks in both luggage racks so we also paid a visit to the local welding shop. While waiting for the bikes to be ready we waisted our days on running, doing some shopping in preparation for the luxury cruise and sipping some of the famous Mote con Huesillo: A farmer’s favourite, made out of barley, sugar, dried apricot and ice. Not our favourite… For lodging we had found an excellent place: Sonia’s hospedaje. A hostel run by an old lady, who felt the house was too big for just herself, which resulted in a busy coming and going of local workers, backpackers, neighbours and a self-proclaimed very famous writer/philosopher. We never really found out who Sonia was of all the people walking in and out, but the old ladies took very good care of us, even treating us to an extra large breakfast the day we were leaving: „We would need it”. 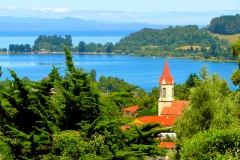 During the 19th century many Germans settled in central Chile, an area commonly referred to as the Lake district. The german influence is still very much apparent in settlements such as Pucon. The town centre, though a bit touristy, still has a pleasant Schwarzwalder atmosphere. The architecture of many buildings is distinctly Bayern, many delicatessen shops sell excellent cheese, delicious Kuchen and the blueberries are sold by the kilo (1,5 Euro/kg!). Only the backdrop of the Villarrica vulcano reminded us that this is still South America. At the time of our visit the Ironman marathon was organized. This created a surreal spectacle: Top-fit athletes cheered on by crowds of generally grossly overweight Chileans. I guess this reminded us of our Newyear’s resolution and for the next couple of days we strictly adhered to our running schedule to counterbalance the ever-present temptations of the kuchen and cheese. In addition, we took to the mountains in the nearby national park Huerquehue. A good 800m climb brought us to the tres lagos (three lakes), breathtaking, literally! 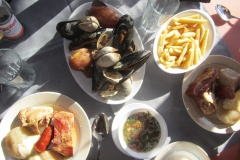 Chiloe Island, just below the Lake district was our next planned stop. After a short ferry we drove the remaining 50km to the seaside town of Ancud. We planned to spend a few days exploring the island that is famous for its wooden churches. The nice lady at the campsite, however, informed us that the ferry connecting Quellon to South mainland Chile only sails once a week and would leave in two days at 4-5 o’clock in the morning. We re-evaluated our planning over a dinner in the restaurant overlooking the harbour. We ordered the local speciality „Curanto”, a mix of clams, bacon and pork sausage served with a strong broth and some rather tasteless potato pancakes, interesting, but certainly not worthy of a Michelin star. The ferry schedule meant that we had only one day to travel to the southern tip of the island while visiting some of these churches on the way…a busy schedule. 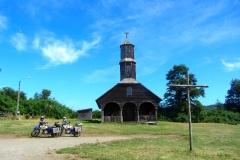 We visited four of the sixteen patrimonial churches, which bore a close resemblance to wooden churches we saw in Romania. All were located along far-stretching gravel roads, but we made it just in time to the Naviera Austral office for printing our reserved tickets. After such an exhausting day, you would think we deserved a good nights sleep. Cheap Dutchies as we are, we did not feel like paying the high hostel prices for just 5 hours of sleep, as the boarding was at 4am in the morning, so we ended up making an improvised camp in the waiting room of the ferry terminal. A local worker showed up and we were afraid to be sent away, to the contrary the nice fellow just wanted to point out how the wood burner worked, in case we would get cold: Chilean hospitality! We woke up at 2.30am, but there was no sign of the ferry til 4am, and we could finally board at 5am. As soon as we hit our reserved seats we fell asleep, only to wake up five hours later at the terminal in El Chaiten. Next, we would finally behold the often raved about Carretera Austral, the only road in this distant part of Chile, once constructed under the Pinochet regime to reinforce the Chilean claim on this lake-filled, spectacular mountainous area.

This entry was posted in Chile, Countries, South America. Bookmark the permalink.