After an overnight stay in a rather unpleasant Turkish town we entered the hectic traffic of Istanbul. This city is a real tourist magnet, which results in high prices. In order to save money we opted for a dormitory in the Agora guesthouse (good value for money), which is conveniently situated near to the main attractions. 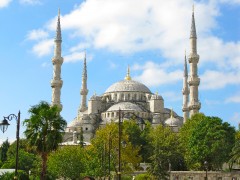 We visited the Aya Sophia, which later turned out to be the Blue Mosque. We gazed amazed at both the exterior and interior of this monumental building. 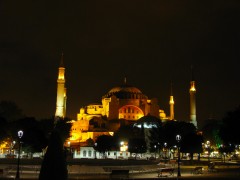 Of course we also visited the real Aya Sophia (just opposite of the blue mosque), but were a little bit disappointed by the sober interior. It was build originally as a cathedral in the 5th century AD and was later converted to a mosque hence only a few original mosaics remain and are interweaved with islamic scriptures and artifacts. 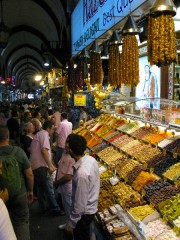 The grand soukh was well worth the visit, Paul even got his motorcycle pants repaired with strong cow leather, which did require a lot of bargaining. We tasted some Turkish delight, drank some free tea, which later turned out not to be free at all, and relaxed at our hostel rooftop terrace. We even managed to keep up to date with the  adventures of “Boer zoekt vrouw” over the wifi connection (by the way boer Aad is weird).

The next morning, after some chitchat with fellow travelers at the hostel, we left for an early visit of the TopKapi palace with its splendid four courtyards and mysterious harem (private quarters of the eunuchs, concubines and the sultan). It also has numerous exhibitions displaying all types of treasures including a 84 karat diamond, tons of gold and even the “real” walking cane of Mozes.
In all, Instanbul is a terrific city which we can highly recommend for a citytrip. The street vendors and restaurant pushers can be a little bit annoying with their three sentence English: “Excuse me”, “Yes, Please” and “Where are you from”, but answering, “Yes you are excused” or “From China” is a nice way to handle these situations and makes for some good laughter on both sides.